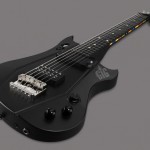 The original complaint about music games like Guitar Hero and Rock Band is that they convinced kids that playing the guitar was actually easy. A few taps, a few strums and you sounded like Jack White or OzzySteve Vai, right? Well Powergig wants to change that perception by offering a real six-string guitar that you can really play and, with the flip of a switch, you can dampen the strings and strum along to your favorite tunes on the XBox 360 or PS3.

The company, Seven45, is also making a guitar game with its own downloadable content that will be something like Brutal Legend, and the guitars are made by their parent company, First Act makers of “entry level” AKA toy guitars and instruments. Nice synergy, eh?

Anyway, more on this from GDC when we have it but until then, feel free to thank me for sticking Summer of ’69 in your head.