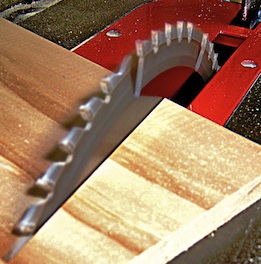 Tomorrow it will be exactly one month since the launch of Google Buzz. The song remains the same: it’s a mess. Normally, that wouldn’t bother me so much — after all, a lot of services are a mess — but Buzz has a lot of potential. But again, it’s been a month. I’m starting to wonder if it will ever reach that potential. I’m also starting to wonder if it shouldn’t have been introduced as something entirely different.

Despite its many annoyances, I’ve been using Buzz regularly over the past month (Gmail integration tends to shove it in your face and I hate unread counts). The one thing I keep coming back to is that Buzz on the iPhone and Android is pretty impressive. Specifically, the location functionality as run through the mobile web is impressive. In fact, that’s what I think Buzz should have started out as.

Yes, I know Google already has a location-based service: Latitude. But let’s be honest: no one uses Latitude. Or if they do, they likely don’t even realize they’re using it because it’s just turned on in the background. And that’s precisely why Latitude doesn’t work.

The past several months have proven that consumer demand for location services is contingent on one thing: the ability to “check-in.” That is, rather than having a service that is always on in the background transmitting your location (like Latitude), people are actually using the services that allow you to dictate when and where your location is sent out (like Foursquare and Gowalla). There’s a reason that services like Loopt has pivoted from one method to the other.

Checking-in works for people because of two main things: simplicity (of the concept) and privacy. People prefer checking-in because it makes sense. You hit a button to say you’re somewhere, and it gets transmitted. You don’t have to worry about whether your mobile device is always transmitting because you’re in complete control of it. In the future, as people become more comfortable with the concept, I suspect some form of “always-on” location will become the norm, but for now, it’s baby-steps.

And that’s why Latitude, as it’s currently built, doesn’t work for most people. But Buzz — the mobile version, at least — is the location-based service that Google should have built. It has the idea of checking-in built into it; you simply do so by buzzing from your device. When you do that, Google offers you the opportunity to tag your buzz to a certain place and instantly send it out to your followers.

That’s another key to why Buzz (and check-in services as a whole) works as a location service: with it, Google finally understands that people don’t want to let others know their GPS coordinates. That means nothing to most people. Instead, Buzz lets you select an actual place (like a restaurant, for example), and send that out with your message. 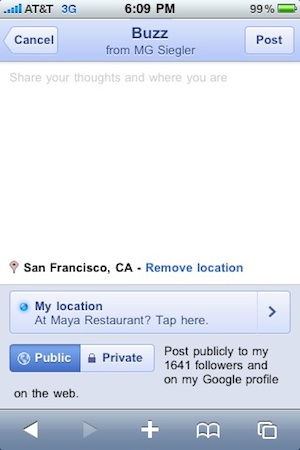 People understand the concept of places, not coordinates. And Google, thanks to its Search and Maps businesses, happens to have databases of more places than probably any other company out there. With Buzz, they’re finally using it.

As a sharing service within Gmail, Buzz isn’t ready for primetime yet. As a location service, Buzz could have been a serious challenger to Foursquare, Gowalla, Brightkite, Loopt, and all the others preparing for big launches at SXSW later this week. Imagine Buzz as a location-based iPhone and Android app (or even just a web app). It still could have been linked to your Google Profile and perhaps would have even been a better gateway drug to making Google more social because it would have been a more gradual build-up.

And to ensure some usage beyond Google Profiles, Google could have put Buzz in Gmail Labs, as an option for Gmail. As a broken social sharing service, Buzz in Gmail is annoying. But as a location-based stream of check-ins (that people could still comment on and like), it’s potentially interesting. And it still would have been exposed to millions of potential users that way. And some users could have even used browser location features to use it within Gmail (Google Chrome is one of the browsers testing this natively).

Google could have kept the Buzz button on its mobile interface for easy check-in/update ability from all of its mobile apps. And Buzz built-in to the native Maps application on Android is simply brilliant.

As a location-based app, Google would have likely been instantaneously bigger than all of its rivals. This is the key reason people suggest that when Facebook enters the location game, it will wipe out the other players — it’s the huge built-in user base.

Then the next step could have been to more directly emphasize the concept of sharing. That would have been to opposite approach of Twitter, which first was all about sharing, and more recently has added the location layer (which Facebook is also likely to do at some point this year). But that makes sense for Google, since the social elements have been their weak point and no one yet has a huge stranglehold over the location space.

Instead, right now, Buzz is oddly split between this sharing service within Gmail and this location-based service that exists on the mobile web. They should have focused on the latter, used the location buzz (pun intended) at SXSW to take out their upstart rivals, and then morphed into a social sharing service down the road. Then they would have been well-positioned (and perhaps more importantly, better prepared) to take on the more established social sharing sites, Twitter and Facebook.

Oh well. Time to go mute some more posts on the Buzz we’re stuck with.