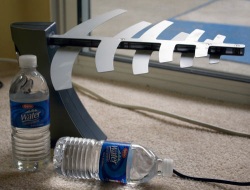 Thanks to some last-minute heroics, Cablevision customers here in the Northeast were able to watch the Oscars last night, which aired on WABC, the local ABC affiliate. Cynics have suggested that’s because WABC wasn’t prepared, no matter how cavalier its previous rhetoric, to give up the night’s ratings (and ad dollars) because it wanted to eek out a few more pennies from Cablevision. (WABC had wanted extra money from Cablevision per subscriber, sorta like that Fox-Time Warner Cable feud from a few weeks ago.) But until both sides came to an agreement, people were freaking out: how are we going to watch the Oscars?! Will it be on YouTube? Hulu? BitTorrent? Newsflash, citizens: a simple, indoor ATSC antenna is all you need to watch WABC (and other broadcast channels), provided you live within range of the broadcast tower.

It really hit me last night during Ron and Fez’s big Oscar show. Some guy called in, addressing the freaked-out Cablevision subscribers, and kindly reminded them that, yeah, a $40 indoor antenna is all they needed to “tune into” WABC, and thus the Oscars. The big digital TV switchover last year only affected analog TV broadcasts—TV stations still broadcast over-the-air digitally. Technical mumbo jumbo aside, anyone within range of the broadcast tower, and that should include everyone in the five boroughs of New York City (maybe parts of Long Island?) could be watching WABC (and others!) right now, totally for free. Well, minus the cost of the antenna.

I used one of those antennas in college and in my rubbish Queens apartment two tears ago, and it worked great. I remember the first time I saw an HD broadcast via the antenna—some U.S. Open tennis match—I was like, “Whoa, this is free? This looks amazing!” Of course it’s free! Technically, you and I own all of that spectrum, but the FCC “handles” it for us.

So yeah, people of New York (and other cities, I suppose), feel free to dump your cable TV and just pull in the broadcast stations with an ATSC tuner. Add a cheap Netflix account, along with a standard Internet connection, and you’ll have all the “TV” you can ever ask for.

The question is: is TV even worth the $40 price tag of an antenna? I wonder.