Cascaad, which is billed both as an ‘awareness engine’ and a ‘smart social media browser’ by the Italian startup behind the service, aims to make the realtime streams you tap into more about you.

Essentially, the tool is designed to filter the never-ending incoming message stream from your friends and millions of others by continuously distilling which part of the chatter is about stories, things and places that match your specific interests, context and social affinities.

Here’s how the service, currently only available as a beta iPhone app (iTunes link), gets pitched in their own words:

The goal is to potentiate your extended awareness of what is happening right now of personal relevance in your world. It is basically a very sophisticated realtime networked search, discovery and filter engine that distills automatically what both your friends and millions of other people are paying attention to on Twitter and other social platforms into the attention-grabbing stories, things and places that match personal interests and social affinities.

Cascaad will soon be releasing a full-fledged Web-based experience, and the company is also working on integrating new data sources and capabilities, including location awareness, as well as extending the platform’s reach. Last week, Cascaad released its first beta of what it calls the SuperTweet API, which it says will allow third-party Twitter applications to “add smart contextual information and monetization […], including semantic entity markup, nonintrusive in-text affiliate commerce links, related content [and] social relevance scores”.

The startup was founded in 2008 by Erik Lumer (PhD Stanford, formerly at Xerox Parc and founder and ex-CEO of Internet TV startup Babelgum). The company’s R&D unit is based in Milan, employs 8 people and will be opening an office in Silicon Valley some time this quarter.

Cascaad has raised close to $2 million in financing over two rounds (one in November 2009, and one last month) from Italian VC firm Innogest Capital. 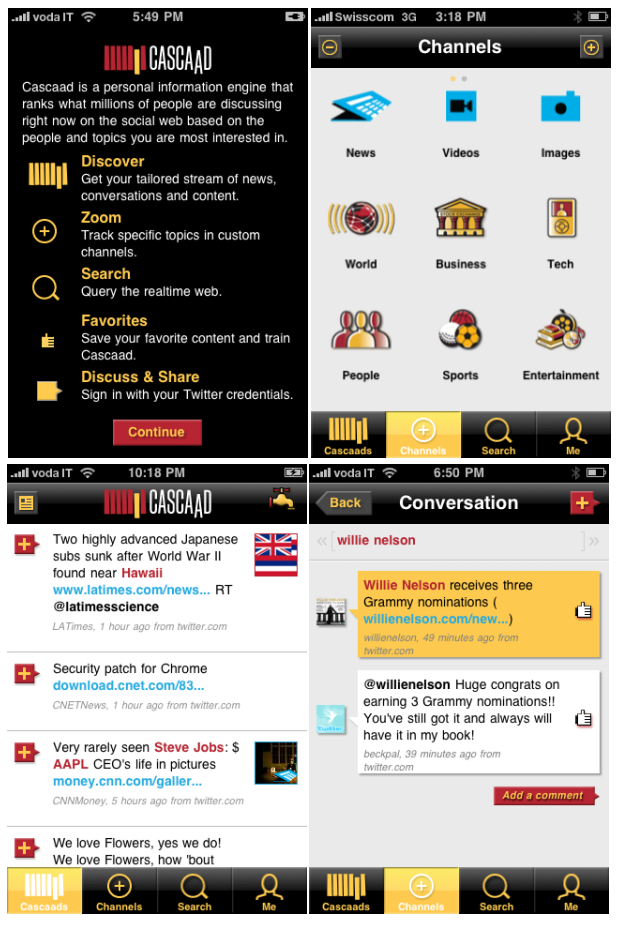