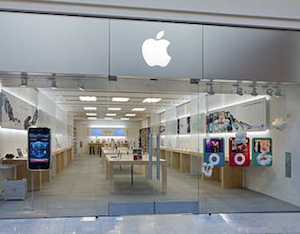 It’s no secret that VeriFone hopes to eliminate mobile startup Square before it even officially launches. Not only did they unveil their PAYware Mobile credit card-reading device just a week after Square made headlines with its unveiling, but they almost immediately started a major advertising push in places such as New York City cabs. And now they have perhaps their strongest weapon yet in the fight: placement in Apple stores.

Starting this month, Apple retails stores around the country will begin selling the PAYware Mobile reader (which is required for the accompanying app to work). It will also be sold through Apple’s online store. VeriFone CEO Doug Bergeron disclosed this information during VeriFone’s conference call yesterday afternoon.

Obviously, this placement could potentially mean a lot for VeriFone. It’s one thing to advertise your product, and say you can buy it online, it’s another to say you can go to an Apple Store and pick up the entire package in one fell-swoop (iPhone + PAYware Mobile reader). Bergeron also noted that the company plans to introduce PAYware mobile editions for Android, BlackBerry and Windows Mobile. While Square is also currently iPhone (or iPod touch)-only, the card reader itself was made to plug into a headphone jack so it should work on a variety of mobile platforms eventually.

Square, while yet to formally launch, is currently being tested by a number of partners. We’ve used it a few times to accept donations, and have been very pleased with the results. PAYware Mobile also seems pretty solid. This should be an interesting battle.

Let’s move on now to our PAYware mobile initiative. The iPhone version of this complete end-to-end payment solution comprise of a VeriShield Protect-enabled card encryption sleeve, an Apple-certified software app, and payment gateway service, commenced shipment in the last week of January. Channel development is key to this initiative’s success. To better reach individual and small business end users, we have launched a highly-effective marketing campaign that has garnered the attention of the national press, including Newsweek, CNN Money, and Fox Business news. We have also made progress in working with our traditional processor and financial institution partners to support this initiative and we will be making key announcement shortly.

In addition, we have established PAYware mobile gateway processing relationships with over 70 ISOs to-date, allowing them to assist existing or new (inaudible) customers in processing payment via the iPhone. Finally, and importantly, customers will also be able to purchase our PAYware mobile solution through our paywaremobile.comdirect sales site, which provide – which forwards transactions to one of five blue-chip processors. And starting in March, at Apple Retail Stores in the United States and the Apple Business Store online.

At the same time, we are also targeting large national, international party and in-home direct sales enterprises who may have already been outfitted with iPhones. Integrating secure, card present payments into these existing applications across hundreds of thousands of users is the next logical step. Later this year, we intend to deliver an EMV pin based version of PAYware mobile for the iPhone, allowing us to meet payment need for iPhone users worldwide. We are also planning to introduce PAYware mobile edition for Android, BlackBerry and Windows Mobile.