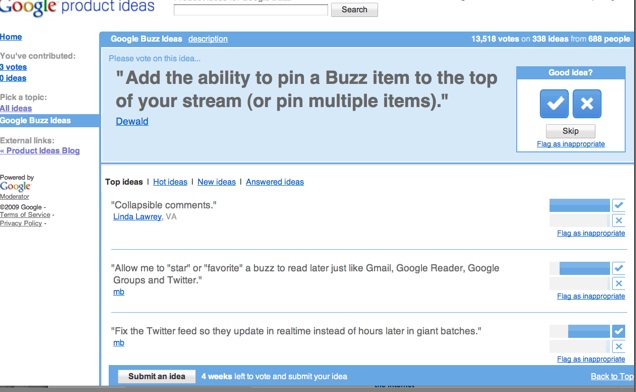 Google Buzz was pushed out the door too early and force-fed to users by placing it in Gmail. The launch has been marked by both privacy and usability issues. But the team at Google behind it, led by Bradley Horowitz, is working hard to fix problems and respond to user feedback. In fact, earlier today, Horowitz pointed people via Buzz and Twitter to an official Google product idea site for making suggestions to improve Google Buzz. The site is powered by Google Moderator, which lets people suggest ideas and then vote them up or down.

Below are the top ten ideas and feature requests on the site right now, which already has 13,607 votes on 338 ideas from 692 people. They range from making comments more manageable to fixing Twitter update imports so that they are more realtime to better filters and a ReBuzz button.

Hmm, sounds like people want it to be even more like FriendFeed. What’s your top feature request for Buzz?