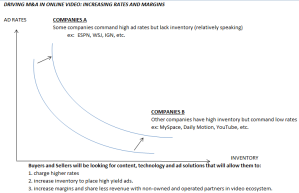 Editor’s note: Guest author Ashkan Karbasfrooshan is the founder and CEO of video site WatchMojo. Below are his picks for the ten most likely M&A deals in online video. Previously, he wrote a series if posts about the state of online video (Part I, II, III, and IV).

Which online video companies will get bought in 2010?   Venture capitalists are desperately looking for exits while the usual suspects are sitting on more than $80 billion in cash: Microsoft ($20B), Apple ($40B), Google ($15B), Amazon ($3B), and Yahoo! ($3B) just to name the cash positions of a few potential acquirers.  Theoretically, it should be a match made in heaven, but the sheer number of venture-backed video startups is staggering so when the music stops, not everyone will find a dancing partner.

Once you assess what drives companies to merge or acquire one another, however, it seems like we’re about to enter a period of mergers between video competitors and see a series of acquisitions by larger companies looking to accelerate their video strategies, with a common theme being increasing both monetization and margins.

Right now, as the chart above shows (click to enlarge), there are two types of online video companies: those with sky-high ad rates but fairly limited inventory (company A) and those with huge inventory but woeful monetization (company B). Companies can extend profitability through technology, ad solutions or content.

With that in mind, let’s look at those 10 potential deals.

Demand Media has raised $355 million but to this day still generates the bulk of its revenue from its domain registrar unit, eNom. However, it is trying to move into the content business, with its “Content Farm” strategy getting a lot of attention.

Demand Media’s existing content lends itself better to an arbitrage strategy built around Google marketing and monetization, but over time it will want to do a better job entering both display and video advertising and it will do that by buying one of the many, many video ad networks out there. Brightroll, which is focused on brands, is one option.  Tremor is another, focusing on reach.  That strategy should fit well with Demand Media’s modus operandi.  Tremor Media’s ads reach 177.6 million uniques, or 85% of internet users.

At first glance, French media conglomerate Lagardere seemingly sees no value in communities as a marketing platform: “There is no clear business model because you have a huge, massive audience, but it is not a marketing community,” says to Lagardere’s Chief Financial Officer Dominique D’Hinnin.

Monsieur D’Hinnin might be right, but never underestimate France’s sense of nationalism. Dailymotion is France’s answer to YouTube and it has taken steps to reduce its share of user-generated and pirated content in favor of professional videos. (Disclosure: Dailymotion is also one of WatchMojo’s distribution partners).

With $68.5M in funding—including a tidy sum from Le Fonds Strategique d’investissement, which is an investing arm of the French State—you can imagine that one of the pillars of the French media landscape, Lagardere Groupe could eventually step in and acquire Dailymotion despite its admitted monetization problems: “At the moment, we are poor at monetising our audience,” admits Dailymotion CEO Cedric Tournay. Lagardere could help with that provided Dailymotion can continue to de-emphasize its less advertiser-friendly content.

Additionally, Lagardere will be able to leverage Dailymotion’s audience to promote its own content: the company owns Hachette along with numerous other media entities.

When 5Min (another one of our distribution partners) launched, it focused on user-generated how-to content. Thankfully for them, they have since moved away from that and currently mesh

b) their monetization engine, a strategy which has propelled 5Min to become a Top 10 comScore video company.

Scripps is a producer of super premium content, and like Discovery Holdings, it might prefer to distribute its programming through TV and cable. But, with consumers viewing more and more videos on the Web, it will need more content for its sites and will look for more inventory online.

The two companies already have a strategic deal in place, so they have some familiarity with each other.

Last year it was rumored that Google was going to acquire Brightcove for $500-700M. That was always unlikely because many of Brightcove’s financial backers are the very same media companies that view Google as the bane of their existence.  Moreover, Google makes a lot of acquisitions but rarely are they large (YouTube, DoubleClick and AdMob being the exceptions).

A more logical fit to expand its video foothold would be Ooyala, which competes with Brightcove and includes Glam Media and others as clients… and was founded by a former Google executive.

Google has the consumer video market cornered with YouTube.  Iit could leverage Ooyala to go after the corporate market by undercutting Brightcove.

The consolidation in ad services peaked with Google’s $3.1 billion acquisition of DoubleClick and Microsoft’s $6B acquisition of aQuantive. After selling ad agency unit Razorfish, today aQuantive is Microsoft Advertising, and as advertising continues to move into video, MSFT will probably want to offer a video content management to go along with the Atlas ad serving platform.  That is where Brightcove fits in.

If you think about it, Google owns video search by way of its YouTube acquisition. Microsoft wants to push into cloud computing and at least conceptually, owning Brightcove would give it a legitimate cloud computing foothold in professional video content with no real threat to any of its core businesses. It could also better integrate Brightcove (which increasingly powers media companies’ videos) into Bing’s video search, helping it kill many birds with one (albeit expensive) stone.

After acquiring Blue Lithium and Right Media, Yahoo! got a shot in the arm and grew its advertising reach across the Web, outside of the Yahoo.com property.

Freewheel is founded by former DoubleClick employees but Google (which bought DoubleClick) might have less interest than one would think in augmenting its video advertising reach across the Web considering it owns YouTube which accounts for 40% of online video consumption. YouTube only monetizes a small share of the billions of videos on the site.

Freewheel, which allows marketers and publishers to manage campaigns across a variety of distribution sites, would be a nice fit with Yahoo!, which might want to extend its Audience Network in video offerings.

Gannett already invested $10 million in Livestream (then known as Mogulus).

The fit is a natural: print media will want to bolster its video offerings (be it content or technology). The main challenge here is that media companies have grown wary of buying technology firms, but news organizations will have a natural predisposition for all things live and the investment sets the stage up for an all-out acquisition.

TubeMogulprovides analytics to countless marketers and publishers (we use them at WatchMojo). Nielsen and comScore are both looking at adding video capabilities and TubeMogul has done a good job of getting wide adoption, providing Nielsen with a quick entry into the burgeoning video space.

AOL’s recent acquisition of StudioNow is a sign of things to come: When AOL was spun off from Time Warner, it was shackled with restrictions on its use of cash and thus the size of the deals it could complete.

But AOL wants to create content, lots of it. AOL’s Tim Armstrong is an investor in Howcast; he was also an investor in Patch, a local startup Armstrong acquired after joining AOL (to his credit, he simply recouped his initial investment and did not participate in the capital gain).

Howcast creates videos themselves, lets users create and upload videos and aggregates other professional content (Howcast is one of our distribution partners as well). While Howcast might have proven redundant with the StudioNow acquisition, AOL has a history of doubling up when it focuses on a space (think ad services: Tacoda, Advertising.com, and Third Screen Media) and Howcast is more focussed on how-to videos.

News Corp.’s Rupert Murdoch is in the process of divesting from the Web: first selling Photobucket, then chucking Rotten Tomatoes to Flixster while retaining a stake in the new venture.  I see something similar happening with Acquisition #10.

Break Media is one of the so-called YouTube clones who has managed to differentiate itself by focusing on the men’s 18-34 market and creating content, be it videos and now video games.  Back in 2007, Lionsgate invested $21 million in stock for a 42% stake in Break.com. At the time, it also got a call option (basically, the right to buy) which is “exercisable at any time from June 29, 2007 until the earlier of 30 months after June 29, 2007 or a year after a change of control, to purchase all of the remaining 58% equity interests (excluding any subsequent dilutive events), including in-the-money stock options, warrants and other rights, of Break.com for $58 million in cash or common stock, at the company’s option.”

The 30 month window expired on December 29, 2009, and despite Break’s momentum, I don’t see any major incentive for Lionsgate to exercise its call option. I do, however, see the following happening (well, maybe…).

Lionsgate might be more willing to trade its 42% stake in Break Media for a smaller share in a NewCo. that houses both Break Media and News Corp.’s IGN Entertainment, another leader in the men’s 18-34 space. (again, bothh Break and IGN are distribution partners).  This NewCo. would then be a more likely candidate for an IPO and would allow both Lionsgate and News Corp. to focus on their core businesses and cash out their investment over time.

Needless to say, all of the above deals are idle, if informed, speculation on my part.  What do you think are the most likely video exits this year?