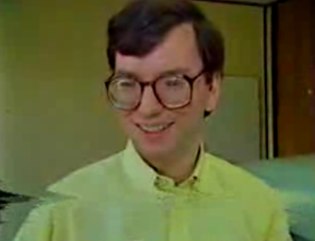 This isn’t new, but it’s new for us. A 1986 TV clip of a then thirtyish year old Eric Schmidt that is just amazing. The awkward smiles and huge glasses say a lot about the era as well as the nerd cred of Google’s CEO. Today’s too cool for school hipster engineers living in lofts in San Francisco and spending more time grooming than coding should be ashamed of themselves.

Just two years later, though, Schmidt had his act together, and looked significantly more like an exec than a nerd. That’s too bad – 1986 Eric was cool.