Trackur, a bootstrapped startup founded by Internet marketing consultant and writer Andy Beal, up until now offered only paid versions of its online reputation management and social media monitoring tools, albeit with free trial periods.

Today, the fledgling company is introducing an entirely gratis version of the Web-based software suite, giving marketers and small business owners a compelling reason to want to check it out and see why basic Google Alerts simply may not be cutting it anymore.

When you enter a keyword in Trackur’s search system, the service will look for mentions in both ‘mainstream’ and social media, tweets, videos, images, tags and so on. You’ll get a nice overview of where that keyword – which would generally be a company, brand or product name – has been mentioned along with some graphs tracking such mentions over time. You can save a search, which means Trackur will run it automatically every 30 minutes and notify you of new mentions across all of the media it tracks.

With any of the paid versions of Trackur, you can save multiple search keywords to your personal dashboard, but the free version will only allow you to do that for one. For a lot of small business owners or marketers, that will actually be sufficient, although the startup evidently hopes they’ll be tempted to pay for an upgrade at some point.

Alternatives to Trackur are plenty and include services offered by companies like Radian6, Visible Technologies and Attentio.

Trackur is self-funded by Beal, who says he currently serves about 15,000+ users, a mixture of people benefiting from free trials and those who are effectively paying for the product. Beal declined to break down those numbers, but says his 3-person startup, which was founded early 2008, has been operating profitably since day one. He also told me he’s been approached by venture capitalists in the past who’ve offered to invest, but that he told most of them that he wouldn’t even know what to do with $100,000 if it were given to him. 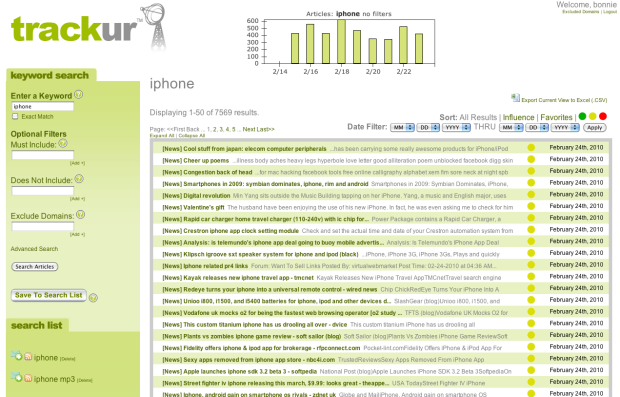