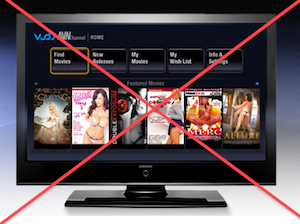 When it was announced that retailer Walmart would buy streaming movie startup Vudu a couple days ago, a number of sites wondered what it would mean for Vudu’s adult content. Here’s what it means: bye bye.

An email is currently being sent out by Vudu letting its After Dark (the adult portion of its service run with adult publication AVN) partners that the section will be discontinued in the “coming days.” Find the full email at the bottom of this post.

Below, find the email going out to Vudu partners. As you can see, it’s asking partners to voluntary terminate the agreement amicably, even though the existing terms aren’t up yet. We’ve reached out to Vudu and Walmart about the shutdown, but they have yet to get back to us. We’ll update when they do.

As you may have recently heard, VUDU was acquired by Wal-Mart. In conjunction with this acquisition we will be discontinuing the “After Dark” adult service over the coming days. Upon completion of the shutdown process, we will settle all accounts with you and ensure that you are paid the full amount you are owed under our existing agreement.

We ask that you complete, sign and return this termination notice at your earliest convenience. Please let me know if you have any questions.

“I can confirm that we no longer offer that content and that customers who previously purchased movies with adult content will receive a full refund.”