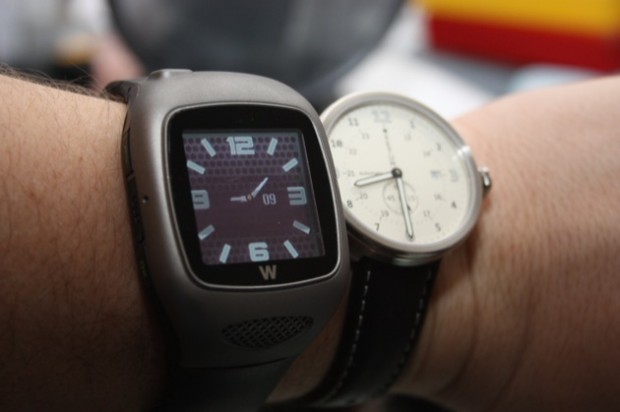 Short Version: The Kempler & Strauss W Phone watch is a great idea. It’s a compact, unlocked GSM phone that makes a great conversation piece and is fun – if a bit maddening – to use. Can it ever be your “first phone?” Absolutely not, but at $199 unlocked you can’t get a GSM phone – at least one stuffed inside a watch – for much cheaper.

In using the Kempler & Strauss W Phone Watch I was reminded of a quote from the Steinbeck book Travels With Charley. In it he describes a venison dish, noting that:

The recipes, the herbs, the wine, the preparation that goes into a good venison dish would make an old shoe a gourmet’s delight.

To be fair, this is truly one of the funnest phones you will ever own. However, like a tough piece of venison, all of the accessories included in the phone make you consistently ask the question “Why don’t I just get a real phone and a Bluetooth headset and call it a day?”

The W Watch Phone is surprisingly small and light. It weighs about 2.5 ounces and is 57mm long, about as big as a standard watch. The screen is about an inch on each side and there is a small speaker in the band. A microphone hides on the side. On the top of the watch is an odd little VGA camera that can take JPEGs at 640×480 and video at 128×104 (!!). It also plays back MPEG4s and most audio files.

These watch phones are not new. A quick perusal on the Interwebs will produce a list of a number of Shenzhen-based watchphone manufacturers who are selling their wares for as low as $99. What Kempler & Strauss has done is add on a bit of design and some quality assurance to a product that’s been available on Shenzhen streets for months, if not years.

I used the phone a few times over the past few weeks and found it to be fun at parties and useful on a limited scale. There are multiple input methods, from tapping the little icons with your finger to using the point of the included Bluetooth headset to pick or scribble out letters and numbers. All of these methods, while sound and approachable with practice, are very frustrating at first.

The handwriting recognition, for example, works as well as it did on the Palm V or the Fossil Palm watch of yesteryear. It appears when you’re entering numbers so don’t expect to be able to write out the Magna Carta on this thing.

The watch can send MMS messages, as well, using photos taken with the piteous camera. The less we say about the camera the better. Below is an actual image:

Other features include “games” – actually just one game that involves catching fruit in a basket – and background sounds that simulate various scenarios, allowing you to blame the phone’s poor reception on your surroundings. “Pub,” for example, makes it sound like you’re calling from a noisy pub, while “sidewalk” simulates a sidewalk.

Making and taking calls with a Bluetooth headset is simplicity itself and the sound quality is fine. Making calls by talking into your wrist and listening to responses from the built-in speaker can lead to madness.

The simple fact that I’m sitting in front of a phone watch right now is a testament to the slow but inexorable ascent of mankind’s prowess as a toolmaker. These are, verily, the days of miracles and wonder and the “Ho-hum” feeling I get when I handle the W Phone Watch is a bit odd. After all, a few short years ago our phones could barely fit in our pockets let alone around our wrists. What Kempler & Strauss – and the OEMs that work for them – have done is laudable and fascinating.

Bottom Line
The W Phone Watch is a cool gadget. If you want to be “that dude” who wears a phone watch, you probably won’t find a better one on the market. If you’re traveling this thing could become a boon companion as it is unobtrusive and works well enough to warrant a second look.