Apple may have just made a major change to the App Store that could render many developers’ applications worthless. We’ve just heard from Jon Atherton, the developer behind Wobble iBoobs, who says that he just received an Email from Apple indicating that his application was being removed from the App Store because of a new policy change: Apple has apparently decided “to remove any overtly sexual content from the App Store.” Here’s the letter Atherton says he received:

The App Store continues to evolve, and as such, we are constantly refining our guidelines. Your application, Wobble iBoobs (Premium Uncensored), contains content that we had originally believed to be suitable for distribution. However, we have recently received numerous complaints from our customers about this type of content, and have changed our guidelines appropriately.

We have decided to remove any overtly sexual content from the App Store, which includes your application.

Thank you for your understanding in this matter. If you believe you can make the necessary changes so that Wobble iBoobs (Premium Uncensored) complies with our recent changes, we encourage you to do so and resubmit for review.

From what I can tell, this isn’t an isolated incident. I’ve tried to download apps called “Exotic Positions” and “Sexy Women”, and both of them gave me errors indicating that the applications were no longer available. However, some applications with similar themes (“Beautiful Boobs”, “Sexy Girls Uncovered”, and “Sex Strip”) worked. All of these applications came with Apple’s “objectionable material” warning that requires you to affirm that you’re over the age of 17. This may be a case of Apple picking and choosing which apps are too sexual, or they may still be figuring out which apps to pull (or the changes may not have propagated to all of Apple’s servers). There are reports on Twitter of other developers having their applications pulled as well.

Of course, many of these “sexy” applications have been on the App Store for many months. Wobble, which lets you add “jiggle points” to any photo (use your imagination) hasn’t released a change in functionality for 6-8 months, and has been installed 970,000 times — none of these were flying under Apple’s radar.

We’ve reached out to Apple for more information.

Update: Apple has given us this response. See this post for more.

“Whenever we receive customer complaints about objectionable content we review them. If we find apps that contain inappropriate material we remove them from the App Store and request the developer to make any necessary changes to their apps in order to be distributed by Apple.” 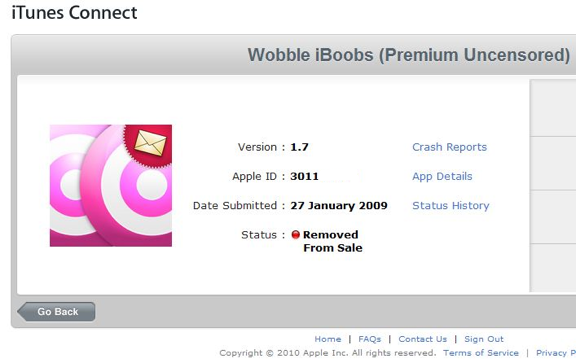