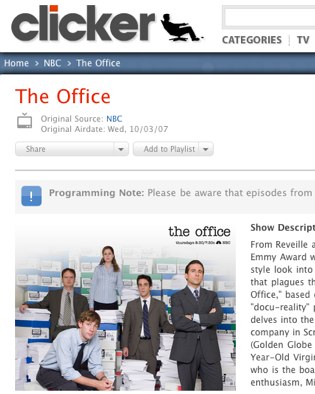 Clicker, a comprehensive search engine for TV content on the web, has closed an $11 million Series B funding round led by JAFCO Ventures, with existing investors Benchmark Capital and Redpoint Ventures also participating. JAFCO’s Joe Horowitz will join the Clicker board. The new funding brings Clicker’s total funding to $19 million, after an $8 million round the company closed in October 2008.

Clicker doesn’t actually store content on its servers, but instead makes it very easy to search through the vast amounts of content available online. Clicker’s index includes over 600,000 full length TV episodes spanning 10,000 shows. The service also allows users to search through premium content including Netflix’s Instant Streaming movies and Amazon Video on Demand (though you have to pay to watch them). The site also offers music videos, and has started teaming up with schools to index their lectures and other original content (UCLA is the first school to try the system out).

CEO Jim Lanzone says that the new funding wasn’t a case of the company needing more money (he says they have plenty left in the bank), but that the company was seeing a lot of inbound interest from VCs and decided to take advantage of the opportunity.  The company now has 32 employees.

Clicker made its debut at last year’s TechCrunch50 conference, and opened to the public in November.