Last summer, we wrote about the launch of Retweet.com, a Tweetmeme knock-off with a killer name. Mesiab Labs, a company associated with some spammy Twitter projects like Hummingbird, launched it in August with some fanfare. However, since then, Tweetmeme has remained the king of the space. And now Mesiab Labs has put the killer domain up for auction.

As you can see on this Flippa page, the current bids for Retweet.com stand at $20,000. This is a huge increase from yesterday when the bids hovered around $10. So far, there are 27 bids. The listing on the site claims the domain gets 12 million uniques a month, and 26 million pageviews. If that’s the case, you have to wonder, why sell?

Well part of the reason has to be that Twitter itself is trying to trademark the word “retweet.” Mesiab Labs was also apparently tried to trademark the name, though it’s not clear if that failed or if they are simply moving to sell before that happens. Twitter also tried unsuccessfully to trademark “tweet” last year.

We also asked Mesiab Labs about the auction. Here’s what they had to say:

When we initially conceptualized Retweet.com, we realized the importance of the new shift that social media sites like Twitter are making on how we filter and consume news.  We developed and fostered Retweet.com and its resulting network to help explore this concept. It has been quite exciting to see stories break before some of the major news media outlets and to watch blogs gain near mainstream status.  It’s also exciting to watch the pulse of the social world shift and sway.  But more than novelty, we are demonstrating incredible new ways to apply crowd-sourcing to answer the question “What matters, right now.”

While we aren’t the only ones in this space, we feel privileged to participate.

Now that we’ve grown and scaled the Retweet network and infrastructure, we’re ready to pass it on to someone who can truly push it to the next level. We’re excited about the opportunity for a new passionate owner to foster and grow Retweet.com and continue to tap the potential of what is undeniably becoming a monumental shift in news consumption.

They go on to note that if they don’t find a suitable buyer in 30 days, they’ll continue to operate the site themselves. It is a pretty killer domain, but is it worth the risk if Twitter gets the trademark? 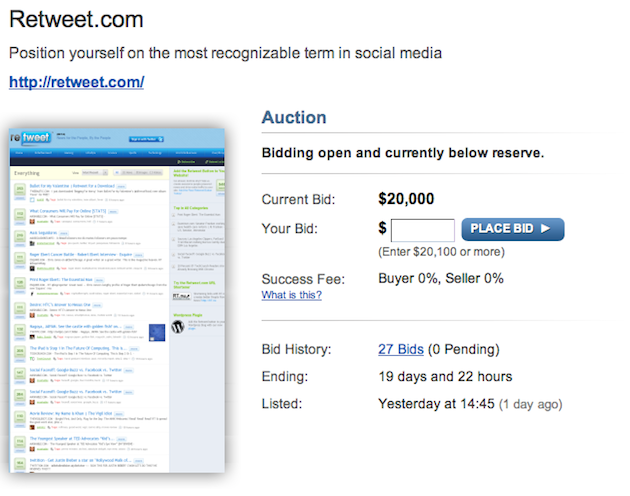