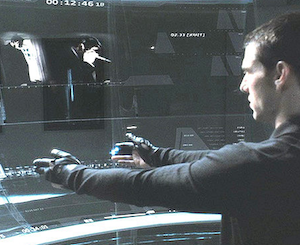 In 2008, I attended a meeting in Madrid, Spain that featured the coolest demonstration I had ever seen. The problem was that I wasn’t allowed to talk about what I had seen because the company was still in stealth-mode. More importantly, several governments, including the U.S. government were still exploring various parts of the technology for next-generation computing systems, so parts of this were very confidential. By the end of that year, Oblong Industries had revealed itself, but still little was said about its project. Finally, people are starting to talk about it.

No, really. The co-founder of Oblong, John Underkoffler, is the man who came up with the gesture-based interface used in the Steven Spielberg movie. And now he’s building it in real life.

The demo I saw a couple years ago was stunning, but it was still just a video. Apparently, at TED, the audience got to see it in action. NYT’s Bits blog detailed some of it in a post yesterday. For those not at TED, Oblong has also made a few demo videos in the past, which I’ll embed below. Again, this is Minority Report.

Oblong’s coming out party couldn’t come at a better time. Following the unveiling of Apple’s iPad, there has been a lot of talk about the future of computing at a fundamental level. That is to say, after decades of dominance by the keyboard and mouse, we’re finally talking about other, more natural, methods of input. The iPad is one step to a multi-touch gesture system (as is this 10/GUI awesome demo), but this Oblong system is the next step beyond that.

Other systems, including Microsoft’s Project Natal for Xbox, are promising similar types of gesture interaction as soon as this year. But the reality is that a system anywhere near this solid is probably still years out. Minority Report, the movie, takes place in 2054, for example. And while that is just a movie, Spielberg instructed the people working on the tech for it to really try to come up with what they thought we’d be using in that time. That said, Underkoffler told Bits that “I think in five years’ time, when you buy a computer, you’ll get this.” Of course, that’s the entrepreneur talking.

For now, I’ll just have to continue to dream about using a computer like they do in Minority Report. But the dream is getting closer, it seems.