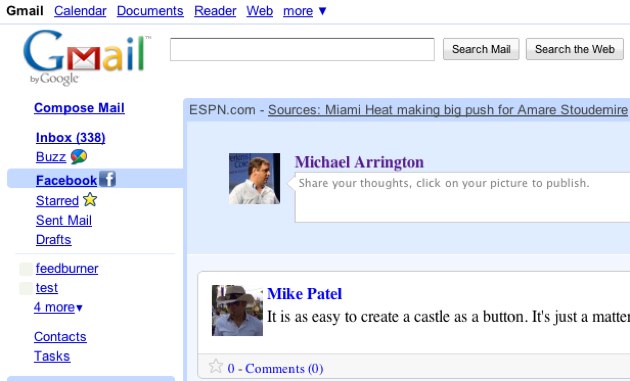 Like me, you’re probably going a little insane with all the Google Buzz noise in your Gmail inbox. Never fear, we’ve got a solution: Add a lot more noise to your inbox by adding your Facebook News Feed, too.

David Mulder has created a Google Chrome extension that adds Facebook into the left sidebar of Gmail, right under Google Buzz. Install the extension, sign in via Facebook Connect, and voila, you’ve got your Facebook News Feed right there with your Gmail inbox and Google Buzz. The extension doesn’t fold the Facebook stuff into your inbox like Buzz. But, frankly, it’s a lot better that way.

I had some problems getting it to work properly on Chrome for Mac, but after a few restarts of the browser everything settled down and it works fine. You can also post status updates directly to Facebook via the extension as well.