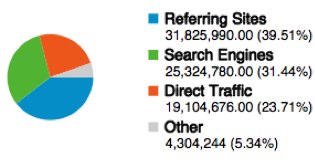 One thing we love around here at TechCrunch is data. And since we’re busy looking up our own traffic stats for 2009, we thought we might as well share those stats with everyone.

TechCrunch is the largest site in our network, followed by CrunchGear, CrunchBase, MobileCrunch and TechCrunchIT, in that order.

By country: The U.S. is the most popular residence of TechCrunch readers, followed by the United Kingdom, Canada, Germany, India, Australia, France, Netherlands, Spain, Japan, Israel and Sweden, in that order.

Traffic so far in 2010 is way, way up on the TechCrunch sites (11.7 million unique visitors so far in 2009). We’ve heard anecdotally from others that traffic has surged in 2010 across most Internet sites. We’ll be digging into that trend shortly, too.