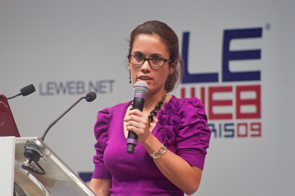 Monica Keller, a MySpace Group Architect who has played a key role in advancing MySpace’s initiatives in activity streams and openness, is leaving the company to join Facebook. Keller announced the news in a blog post this evening. She will be joining Facebook as an Open Source and Web Standards Program Manager, where she’ll be joining a team that includes David Recordon and Luke Shepard. MySpace confirmed that Keller had left the company but declined to comment further.

Keller played a key role in launching MySpace’s Real-Time Stream API, helping to design the Real Time Stream using PuSH and architecting the network’s Twitter Sync Ingest.  Keller was involved with the technical aspects of the Stream, and was also involved with the design of MySpace’s developer platform. She’s also represented MySpace on numerous conference panels.

While Keller has some nice things to say about the struggling company in her post, she clearly wasn’t pleased with the way some things were handled at MySpace:

But I have chosen to leave. While I was able to have some temporary creative freedom this is not the norm or part of what other engineers enjoy and I do not feel there is one cohesive push to deliver the best we can deliver anymore.

To my friends and colleagues at MySpace, some parting advice:

It is imperative that MySpace puts in place strong technical leadership who can attract good technical talent and make well-informed decisions. It is important that they stay connected to rest of the world and work on interoperable standards and solid products which benefit the end user. Many of my fellow engineers have fantastic ideas and a plan for phased delivery.

This is a loss for MySpace, but it certainly isn’t the end of their real-time and open initiatives (which have been more progressive than Facebook’s).  We hear that these are still being spearheaded by recently promoted MySpace co-president Mike Jones, and that Christina Wodtke, who recently joined the company after running the activity stream product at LinkedIn, is involved in running the team’s day-to-day operations.