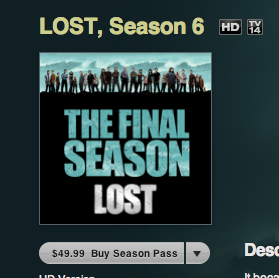 Leading up to its January event, rumors were swirling that Apple was talking to the TV networks about offering possible subscriptions to their shows through iTunes. Of course, that never happened. While reports had CBS and ABC interested in such a deal, the other networks apparently were less enthusiastic about it — perhaps out of fear of repercussions from the cable companies. But that doesn’t mean that Apple is giving up.

A new report today in the Financial Times indicates that Apple will begin testing the sale of $1 U.S. TV shows this year. Specifically, the new pricing could launch around the time that the iPad does, which will be March/April, FT notes citing people familiar with the discussions. Apple currently sells its shows for $1.99 (standard definition) or $2.99 (high definition) through iTunes. These $1 would be the standard definition variety, apparently, as they will play on the iPad.

Obviously, by cutting the prices of the shows in half, Apple and the networks in the test are trying to see if it spurs sales. It undoubtedly will, but this remains a temporary solution. Apple still wants to do some sort of subscription service for the shows it offers through iTunes . And I would be all about that because it would strike a blow to the major cable operators that control the industry with an iron fist and make us all pay insane rates so they can pad their profits.

Also, a subscription version of television shows would mean you wouldn’t have to store all of them, all the time. It’s simply not practical to buy all the shows you want through iTunes right now. Even if you could afford it, the amount of space they take up would quickly overwhelm your hard drive. This is exactly why iTunes is inevitably going to move to the cloud.

Apple has been testing discounts on its TV shows even before this announcement. For example, if you bought the latest season of ABC’s show Lost early, you could get the season pass for $39.99 instead of the regular $49.99. It’s not clear how the new $1 pricing would change season passes, but presumably, they would be much cheaper as well.