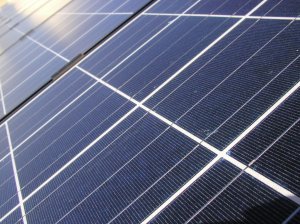 One Block Off the Grid, a company that helps residents get competitive group pricing for solar panel installation, has raised a $5 million series A round of venture capital from New Enterprise Associates. The company has gotten pretty far without formal venture cash—facilitating more than 600 installations in 2009, most of that in the fourth quarter. 1BOG, as it’s called, hopes to install five-to-ten times that amount this year, so that NEA cash will help the company hire and grow.

Think of 1BOG like another NEA investment, Groupon, but focused on solar panels. The site groups together customers in large metro areas interested in having panels installed and helps get them the best price. Only one could argue there’s a much bigger need for IBOG than Groupon. Most people don’t know where to start if they want to install solar panels and have no idea how to compare bids between contractors. On average, 1BOG saves customers 15%. And, of course, there’s the whole getting-us-off-foreign-oil/saving-the-planet benefit to 1BOG.

The UI is impressive. You enter your address and it pulls up an aerial view of Google maps. You pick your roof, outline where you want the panels and get a few detailed options including cost, leasing options, local rebates, added value to the house and how much time the panels will take to pay for themselves. Prices and the benefits of solar can vary wildly depending on where you live, local subsidies, what you pay for electricity now, and how much sun you get. “There are some areas where the economics for solar are mindblowing, but no one knows it,” says Dave Llorens, 1BOG’s CEO.

This is less a company saving the world, and more of a company that helps people who talk a good game about saving the world actually go through with it. And that’s the key. While solar investments are down more than 60% in the last year, lean companies that can help bring on the tipping point in adoption have a much better shot at getting some cash.

Speaking of big talk about changing the world, the company is a spin out from Virgance, which we’ve written about before here. In previous articles, Virgance’s founder Steve Newcomb described the company as a startup that would release “Activism 2.0 campaigns” much like EA releases blockbuster games. That model seems to have evolved. Now, he talks about the company in terms of an incubator that helps create and spin-out low-cost companies that will help make the world a better place.

This isn’t a non-profit. The focus is just on greed-based, high-growth companies that will also “do good.” So far, Virgance has four in its stable, and Newcomb is trying to figure out whether there’s a way to scale that up to 40. He doesn’t yet know if that’s feasible, but if it is, expect him to raise a big venture round too.