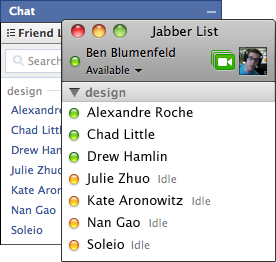 If you’re a fan of Facebook Chat but haven’t been able to use it in your favorite chat client, good news: Facebook has just launched support for Jabber/XMPP, an open protocol that makes it very easy for any chat client or web service to integrate Facebook Chat (it’s also the same protocol used by Google Talk).

Facebook first announced that it was working on implementing Jabber/XMPP support way back in May 2008, and rumors that XMPP support was on its way began anew in November.

There’s a chance that this will lead to a surge in Facebook Chat usage, since it can now be easily integrated into just about every chat client out there, including iChat and AIM. That said, Facebook Chat has already been available though some major clients like Adium, Meebo, and Pidgin, though integration required some extra effort from those applications’ developers. In other words, if you really wanted to connect to Facebook Chat outside of the social network, you already could. But even with these applications, Facebook says that the authentication experience through XMPP should be more seamless than it was before, and that the company is also launching Facebook Connect support for these third party chat clients.