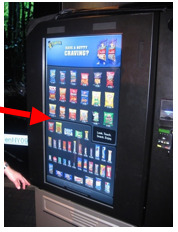 And you thought our government was low-tech. Capitol Hill staffers now have a huge iPad-like vending machine featuring a large touchscreen system that lets you choose your poison and then watch a little animation as it is vended.

It’s kind of dopey but I guess its better than the big open spring system they use currently. After all, who wants to see a bunch of ugly candy in a machine when you can watch a little video when you buy. The system comes from the National Automatic Merchandising Association and it seems that it might be some sort of demo system for the staffers instead of a real product.

There’s a bit more information at this clever blog but don’t look for this machine at your local YMCA. It’s still in testing and they only place milquetoast enough for it to survive was apparently our nation’s capital.