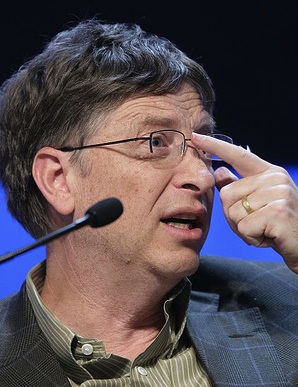 Sometimes tips come in that seem too good to be true. Take today, for example. I got a tip that Bill Gates’ new site, The Gates Notes, was running on a Linux-powered server. This would be ironic since Gates is of course the founder of Microsoft, which is Linux’s biggest competitor in the server market. It would be the equivalent of catching Gates or CEO Steve Ballmer being caught using (and not just signing) a MacBook at a conference. So is it true?

A quick search on Netcraft shows that thegatesreport.com sure enough looks to be running on the Linux OS. But wait. The results also say that web server is Microsoft-IIS/7.0. That doesn’t sound right, so what gives? Well, it turns out that because Gates is using Akamai to mirror his sites’ content in the event of massive traffic (or more specifically, something like a DDoS attack), this data is being filtered through there. Akamai uses Linux for its servers, so that’s what OS is being passed back to Netcraft. But at the same time, to make things more confusing, the Akamai servers are still passing back the correct server header for Gates’ site: Microsoft -IIS/7.0.

How do I know this? Because the same thing happened in 2003 when it was humorously, but erroneously reported that Microsoft was using Linux servers to run microsoft.com. In fact, the same thing was going on: Microsoft was routing its traffic through Akamai, which again, runs Linux boxes. Microsoft has since apparently changed to its own servers since then so that they now correctly return Windows Server 2003 as their OS. That is likely what The Gates Report is running on as well given the Microsoft-IIS/7.0 web servers.

So sadly, no nice bit of irony here, it would seem. But if you haven’t yet done so, take the opportunity to check out Gates’ site, it’s really well done and full of good information.