Last year, Box.net acquired a small company called Increo without giving much insight as to what they’d be doing with the technology. Today, we’re seeing the fruits of that acquisition: Box.net is launching a new integrated Flash file viewer, allowing users to immediately view over 20 file types from their browser, including most common document formats, images (including Photoshop), audio, and video.

From a technology standpoint, Box’s new viewer has a lot in common with the converters you’ll find on Scribd and DocStoc: it takes documents and makes them readable in a Flash-based viewer, so you don’t have to worry about installing any extra software to view the file. This makes it easier to share files among coworkers and access them from other computers.

Of course, one issue that you’ll find with many small businesses is that they use files with proprietary formats — things like accounting spreadsheets, statistical reports, or patient data. To deal with these, Box has built its platform with extensibility in mind. For now, they aren’t supporting these proprietary formats (though they say the 20 formats they do support cover 95% of the files stored on Box). But they intend to quickly build out modules for new formats, and will help the developers behind proprietary apps build support for their own file formats. Finally, Box intends to offer tools to the public, so the community can develop modules to support even more formats.

Aside from the viewer, Box has been showing strong growth over the last year. CEO Aaron Levie says that in 2009, Box’s reveneue from its enterprise offerings grew by 500%, and the service is now up to 3.5 million users with over 100 million files stored. The company now staffs 70 employees. Levie recently wrote a guest post for us describing how the enterprise is moving to the cloud (and obviously Box is one player looking to welcome them). 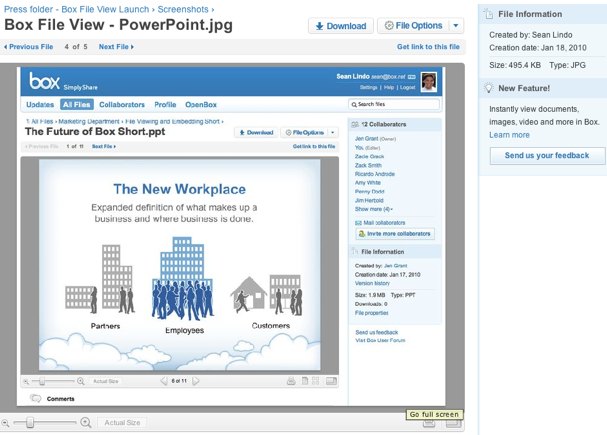