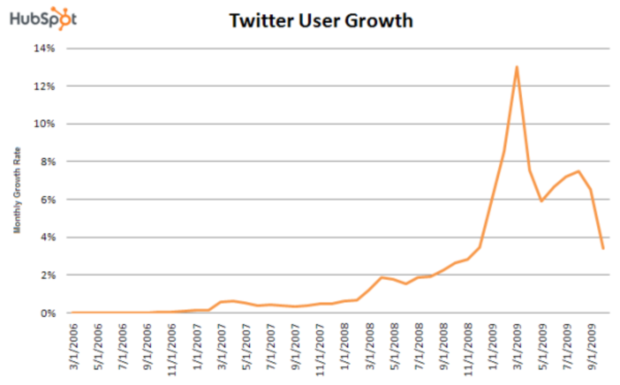 Marketing software startup HubSpot has put together its third ‘State of the Twittersphere’ report, which is based on an analysis of more than 5 million Twitter accounts and 6 million tweets, collected by the company’s free Twitter Grader tool.

The main take-away from the report (PDF): peaking at around 13% in March 2009, growth in new Twitter users has recently slowed down significantly, dropping to a mere 3.5% in October 2009. That’s still growth, but a mind-blowing growth rate it is no longer.

And as we’ve reported before, visits to Twitter.com have declined in number too, dropping 8% in October 2009. Also, Erick yesterday posted a must-read analysis of how the realtime web (and Twitter specifically) can be measured, if you’re interested.

We should also note Twitter CEO Evan Williams recently tweeted that they had their single biggest usage day on Jan 12, and that they were expecting to break that record again the day after. That is well possible, and consistent with HubSpot’s findings:

In the seven months since HubSpot last examined the ‘twittersphere’, the average Twitter user has become less of a newbie, claims the company in the report. The average user is not only following more people, he or she also gets followed by more people and posts more updates.

Also worth noting: HubSpot says the average Twitter account became better implemented during the period from July 2009 to January 2010, as more users have taken the time to complete their profiles, adding bios, locations and web addresses.

HubSpot’s report paints a picture of Twitter slowly but surely increasing its international footprint: locations listed in Twitter profiles (and thus self-reported by users) were much more spread across the globe than before:

Does the above ring true for you?