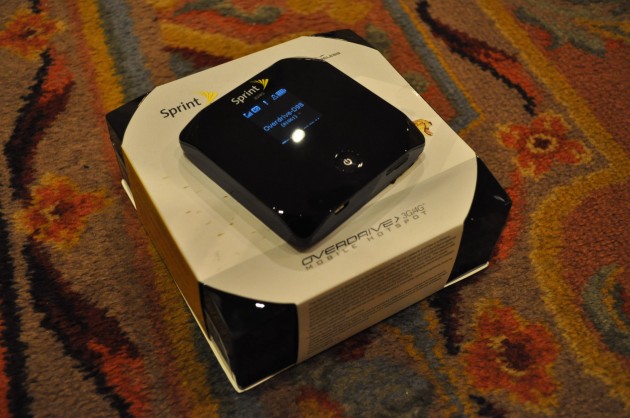 Short Version: The Sprint Overdrive is a small, compact portable 3G/4G cellular data network to WiFi dongle designed for use by up to five people simultaneously. The best part is the ease of use and the worst part is the dearth of 4G networking outside of a few major cities.

We are of two minds about the Sprint Overdrive. In terms of design and usability, the Overdrive is excellent. It is a small, compact device with OLED screen and removable battery that holds a charge for about four hours of heavy use. Up to five users can access it at once and the security information appears right on the screen, allowing folks to glance over instead of asking you to give them the device to read the code off the back or, worse, having to look it up.

On the other hand, 4G is pretty sparse and on a good day we got sub 4G speeds in many of our tests in Vegas, although by any standard 4G there was sparse. At best we hit 2Mbps in real terms.

3G speeds were on par with what we’d expect in various Sprint coverage areas. A quick speed test gave us 355KBps down and 93KBps up. Various locations gave us the same numbers.

On the whole, this is a well-designed and clever product. Ideally you need to be in a 4G area to grab the full value but as those roll out over the next few months you might as well future proof now.

Bottom Line
Impressive design and good performance make this a dongle to watch.