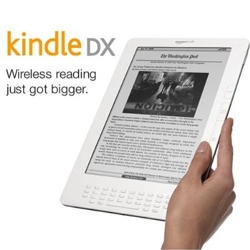 Amazon’s Kindle device sparked quite some controversy last year over its text-to-speech capabilities. The Authors Guild was up in arms over the feature, identifying it as a threat to audio book sales, and the National Federation of the Blind (NFB) and the American Council of the Blind (ACB) had some things to say about the Kindle, too.

In June 2009, NFB and ACB jointly filed a discrimination lawsuit against Arizona State University (ASU) to prevent the university from deploying Amazon’s Kindle DX as a means of distributing electronic textbooks to its students because the device cannot be used by blind students. Sounds arbitrary, I know, but more on that later.

ASU was one of six institutions of higher education to deploy the Kindle DX as part of a pilot project to assess the role of electronic textbooks and reading devices in the classroom.

The main contentions in the lawsuit filed by NFB and ACB – which also targeted the Arizona Board of Regents (ABOR) – was that while the Kindle DX has a text-to-speech feature, the menus to select a book or purchase a book are not blind-friendly, making it impossible to select textbooks for download.

The blindness organizations alleged that this was in violation of federal law. ABOR and ASU denied and continue to deny any violations of the law. Either way, the parties this morning announced that they have reached a settlement agreement.

The agreement was reached in light of several factors, according to the press release: ASU’s commitment to providing access to all programs and facilities for students with disabilities, the fact that the pilot program will end in the Spring of 2010 and the university’s agreement that should ASU deploy e-book readers in future classes over the next two years, it will strive to use devices that are accessible to the blind.

Interestingly, the settlement agreement also stipulates that Amazon “and others” are making improvements to and progress in the accessibility of e-book readers. It’s unclear which what these improvements are and when they will be into effect.