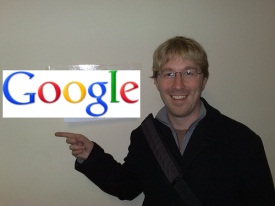 It’s no secret that Google is a big proponent of open source technology and the open web (to a degree), and it’s no secret that Chris Messina is too, either. It’s thus not terribly surprising that the man is joining the Mountain View Internet giant as its new Open Web Advocate.

Messina announced the news on his blog, and referred to his move as a very happy birthday present (he’s turning 29 today).

Although involved in a slew of projects (Diso, Citizen Agency, Activity Streams, and others) and his capacities as board member of the OpenID and Open Web Foundations (which he’ll continue to be), Messina previously worked part-time for Vidoop, but was laid off around May 2009.

In the past, he’s also worked for (other) browser software makers such as Mozilla and Flock.

In his blog post, Messina says he’s been mulling over such a move for some time, and that multiple options were on the table. He writes that he feels he’s just getting started with his work, and that by joining Google he feels he can make a bigger impact.

Google lost one of its social forces and open web evangelists last year when Kevin Marks decided to go work for British Telecom instead, but last month the company recruited former Plaxo CTO Joseph Smarr to ‘turbocharge the opening up of the social web’. Messina’s other good friend, Jaiku co-founder Jyri Engeström, did the exact opposite about two months ago by leaving Google after a two year run.

People come and go, but with Messina, Google has attracted one of the people that I know is the most passionate about the future of the social web, and there’s no doubt in my mind that what he’ll be doing at Google will ultimately prove useful for the Web as a whole.