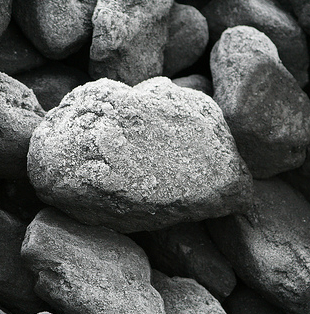 Of all the things Google has launched this past year, the most useful may be its Music Onebox feature that allows you to easily play popular music from Google Search results. Following its debut in October, I found myself using it left and right for songs I wanted to listen to. One thing I noticed was that while deals were in place with iLike, imeem, Rhapsody, and Pandora, the majority of the one-click play results were from the streaming music service Lala. This was awesome because most of the songs served up by Lala were the full versions. But fast forward to today, and it’s a much different story: Lala Onebox results are few and far between.

Why? It’s hard to know for sure, but it seems pretty likely that Apple’s recent deal to purchase Lala is at play. At the very least, it would seem that behind-the-scenes politics are dictating the results now being shown. We noted at the time of the Apple/Lala deal that it could change the Onebox offering, and it looks like it has. Plenty of results that used to serve up a Lala play option now default to iLike, which itself is now a part of MySpace Music (as is imeem). In fact, doing a random sampling of 30 popular songs brought yielded 28 iLike Onebox results, and only 2 Lala results. The problem with this is that for the majority of iLike Onebox results, you can only listen to either 30 or 90 second clips, rather than the entire songs, like you could on Lala. That obviously makes Google Music Onebox music much less useful.

A couple weeks ago, BusinessWeek got a comment from R.J. Pittman, Google’s director of product management, stating the Apple’s Lala deal would not alter the Google/Lala agreement. “We are agreeing to continue to leave the service as it is,” he said. (Apple declined to comment on the matter.) But this may simply mean that Lala will remain as one of the Onebox options, but has been taken out as the featured player for most musical content.

“We have enjoyed a good relationship with Apple for many years, and that continues to be the case,” Pittman also told BusinessWeek. That’s true, but there has definitely been a growing divide between the two in recent months as their interests continue to overlap. This has become a big enough issue that Google CEO Eric Schmidt had to step down from Apple’s Board in August despite assurances that he had no plans to do so leading up to that.

It’s not clear if it is Apple or Google that would have wanted Lala to be less prominently featured in Music Onebox, but it’s certainly possible that neither really liked the placement. After all, in pitching the idea to the record labels, Google likely played up the idea as an alternative to iTunes. The music labels have long sought a viable alternative to Apple’s musical powerhouse that could restore some leveraging power to them. Meanwhile, Apple will now have to foot the bill for Lala streaming — and that means paying the labels for every clip longer than 30-seconds, we hear. So they probably don’t want all those Lala clips being served up either.

Regardless of the reason, Google Music Onebox is now a lot less useful, and that’s too bad.

Update: As some people have noted in the comments, results on searches vary — but it’s important to make sure you’re logged out of your Google account and you clear you cookies. The reason is that Google keeps track of your preferences in a cookie. 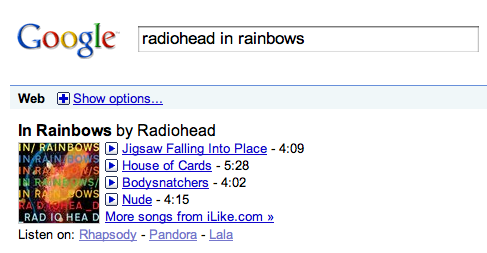 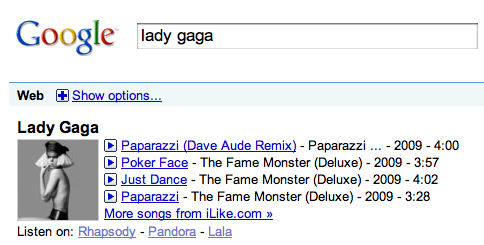 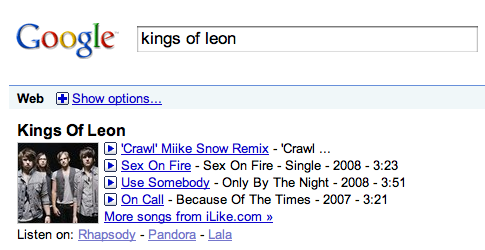