It’s not often that you hear about a startup still in deep stealth that has over 40 employees and backing from some of the biggest names in the valley. But that’s exactly the case for Santa Clara-based Kakai, which was founded in May by Chegg founder Osman Rashid. The company has recently closed a $7.5 million Series B round led by Andreessen Horowitz, with participation from Josh Kopelman (First Round) and Ron Conway. Marc Andreessen will be joining Kakai’s board. This brings Kakai’s total funding to $9.35 million, after a $1.85 million Series A earlier this year led by Rashid himself and Mike Maples.

Very little is known about Kakai at this point. It was cofounded by Rashid and engineer Babur Habib, who has spent time working on both semiconductors and software at Intel, Philips, and Exponent. The company has been rumored to have something to do with electronic readers, but all reports are vague. I did manage to dig up the following from an old job listing, which seems to be in line with those rumors:

Rashid isn’t talking. He does say, though, that we’ll likely be hearing much more from the company come late March. He also says the 40 person company is actively hiring top technical talent.

Don’t bother looking at Kakai’s homepage for more information. It has no details, and appears to have been designed to look as drab as possible. 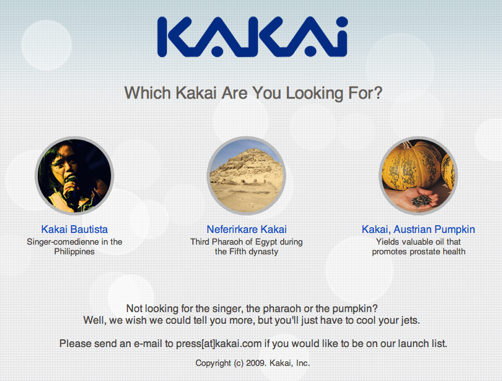