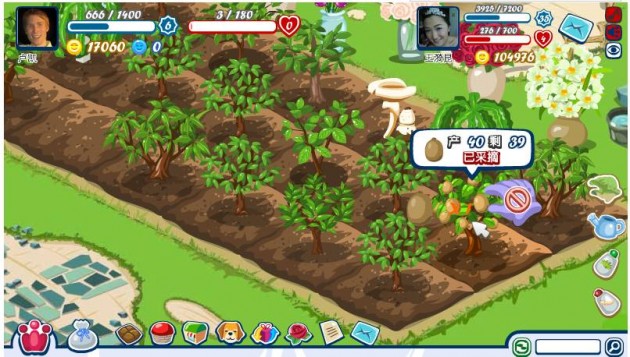 Editor’s note: This is a guest post by Shanghai-based social market researchers Kai Lukoff and Lucas Englehardt from BloggerInsight, a company spun off from Web2Asia which crowdsources market intelligence through an online expert panel of bloggers.

On the Chinese Internet, “harmony” is a euphemism for censorship. Mafia games were “harmonized” over the Summer, for example, as they “embody antisocial behavior like killing, beating, looting and raping” and “gravely threaten and distort the social order and moral standards, easily putting young people under harmful influence” according to the Ministry of Culture.

Foreshadowing the government’s imminent policing of social games, Chinese netizens are now picking—not stealing—crops from their friends’ farms.  Five Minutes, the developer of the smash hit Happy Farm (the first SNS farm game), confirmed that the terms had been voluntarily changed in an interview with BloggerInsight.  This comes as the government is “considering specific social gaming laws and regulations, to be enacted as early as next year… to end the chaotic market conditions,” according to ChinaNews, which scooped the story on Wednesday last week.

A string of negative press has hit social games in China, which may signal a propaganda campaign by the government to besmirch social games.  Many of the stories are fake, according to industry insiders. Just last month, a doctor’s fatal neglect of an infant in critical condition wasblamed on his play of Happy Farm while on duty, though further investigation concluded that he was on a QQ Chinese Chess Game. Happy Farm is also blamed for destroying jobs and relationships.

The Chinese government does not shy from bold action to fight social ills. New regulations were recently enacted to prevent virtual currency inflation. A survey by the National People’s Congress classified more than 10 percent of China’s youth as “addicted” to the Internet, a serious statement in a nation where boot camps are built to combat Internet dependency.

The Chinese government is exerting control over social networking sites. Since the ethnic clashes in Xinjiang, a combustible Western province, the government has launched The Great Internet Shut-Down, with a focus on social media. Facebook, Twitter, and most Chinese microblogging sites are blocked. Intellectual property violations (rampant) and scam offers (rare) are of tangential concern, if an issue at all.

Although the SNS landscape is splintered, the government is determined to maintain control. There is no Facebook, no single dominant social network for all of China: the top 3 are Qzone, Kaixin001, and RenRen (see chart).  When it comes to games, Qzone and Kaixin001 develop everything in-house with games inspired from Facebook, while Renren has a mostly open API so it can tap into outside developers to copy games for them. All have keyword lists and teams responsible for the instant removal of “objectionable” content. 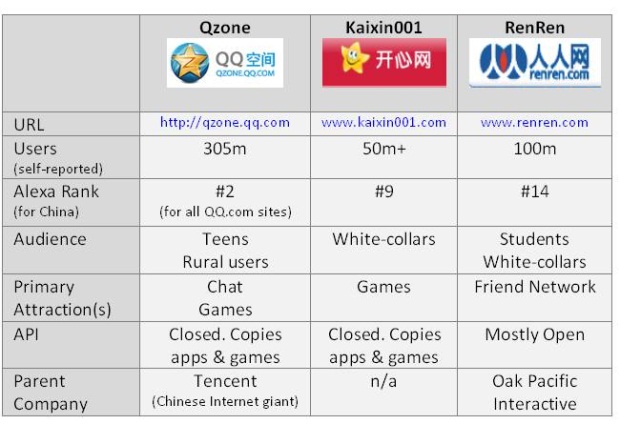 Platforms have borne the responsibility for game regulation until now, but developers may soon become practiced in self-censorship too. The new regulations will likely be similar to those for MMORPGs: a list of “do’s and don’ts” for Chinese social games, according to an industry insider. This could include age ratings or a requirement that social games be suitable for players of all ages.

“Game developers and platforms in China should consider themselves as casino operators or cigarette manufacturers,” said Toine Rooijmans, Director of Strategic Operations at Circle Pleasure, “developers design it to be addictive, and the platforms maximize utilization and promotion of addictive content.”

Social games are wildly popular in China. Statistics are impossible to come by: user data is available only for RenRen and 51.com, which are far smaller gaming platforms than Qzone and Kaixin001 (which have strict “no comment” policies). BloggerInsight estimates that 27 million daily active users play Happy Farm across all platforms in China, which is about as many as the 29 million daily users who play Zynga’s FarmVille on Facebook.

China’s social games are similar to those on Facebook: the top 10 social games includes farm, aquarium, pet, and restaurant games.

One notable difference is that Chinese games are more competitive: status and stealing play a larger role.

The one cooperative option is to send medical experts to assist. That balance could change as the government “integrates” social games into its harmonious society.

Now it appears that even stealing crops is sensitive; Happy Farm game developer Five Minutes wanted to stay ahead of the trend in regulation by changing its language.

The Next Opium War?

Nevertheless, Western social game developers are knocking on the door, with Popcap Games as the first major entrant with Bejeweled Blitz 2 on RenRen on Nov. 23, 2009. The implications of stricter regulation are especially serious for such foreign game developers. For in this war, the Chinese government holds all the power.

As Blizzard’s World of Warcraft can attest to, a shrewd political strategy is essential to success in China. Their case is now a convoluted mess of bureaucratic infighting between two Chinese government agencies, the same bureaucrats who will soon regulate social games.

The China market is seductive, but outside game companies should proceed with caution.  Foreign developers would be wise to cultivate political ties and partner with or build a local studio, as Popcap Games did. Also, be sure your games promote “harmonious social values”—Mafia Wars need not apply.