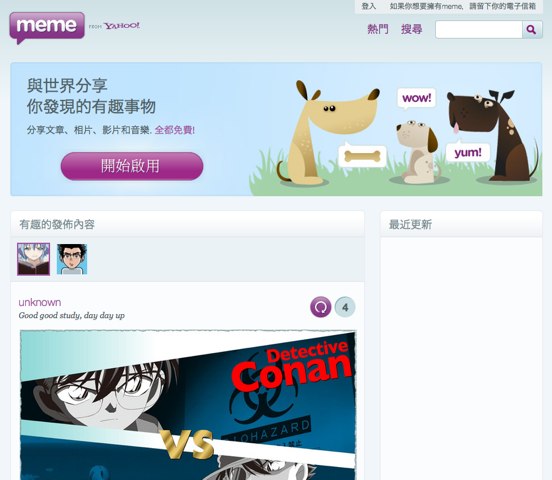 The opportunity for microblogging platforms in Asian markets is substantial in terms of users; and tech giants and startups are taking the potential of this market seriously. Twitter rolled out a Japanese version (with Digital Garage) of its platform long before it added French, Spanish and Italian versions. Microsoft recently launched a microblogging-like platform in China, called MSN Juku, which based off of Windows Live Messenger. It looks like Yahoo is making a venture with its recently launched take on microblogging, Yahoo Meme, by launching a version of the platform in Chinese.

Yahoo Meme, which was launched in Bahasa Indonesia, the national language of Indonesia, not too long ago, lets users post their own content (including text, photos, videos, links and more) and repost the content of others with one-click publishing, allows users to follow other Meme users (via one-way connections, no friend authorization is required) and comment on their posts. Meme’s content limits are higher than Twitter’s—the limit is 2,000 characters.

The Chinese version seems to be a clone of the other versions of Meme, which include sites in English, Spanish and Portuguese. According to IDG, about 124 million people, or one in three of China’s Internet users, currently use social-networking sites. But while China serves as a potentially lucrative market for microblogs, the Chinese government restricts citizens from accessing certain parts of the Internet. This year, China blocked access to Twitter and Facebook, as well as to micro-messaging site Plurk, which has a significant user base in East and South Asia.

But Yahoo won’t have to struggle with just censorship, the site will also face stiff competition from MSN Juku and Twitter. This is pure speculation, but it doesn’t seem like Meme has taken off virally yet.This latest version of Meme was rolled out without any fanfare or press, which isn’t surprising considering that all other versions were stealthily launched. Yahoo also launched an API of Meme to jumpstart third-party applications built off of the platform.