The overflowing inbox. It’s a problem many a journalist or blogger has had to deal with, but it’s often a necessary evil. After all, we’re all on the hunt for the next big story, cool gadget, or interesting startup, and Email has long been the standard for receiving pitches. Unfortunately, Email is really bad at filtering through the noise, so it’s easy for good stories to fall through the cracks. That’s where eGether comes in. The new site is looking to offer an alternative to the pitch-by-Email method. It’s essentially a social network for people who are pitching, and people who are looking to be pitched.

eGether was founded by Vincent Nguyen and Ewdison Then of SlashGear, a rapidly growing gadget site, so they know a thing or two about some of the problems with the standard Email pitch. Nguyen says that the site combines elements of many social sites, like Flickr, Facebook, Twitter, and YouTube, to create a social network that’s optimized for efficiently submitting or reading pitches, as well as for learning about the people behind them.

Like Facebook and Twitter, the site lets you update your status, which you can use to share articles you’ve found interesting or converse with other members using an @reply system. These updates have a 144 character limit, and are shown in a Twitter-like stream. There’s also a second class of update: The Pitch. These are longer updates that allow members to upload text, documents, images, entire media kits, and more. In effect, they’re much like the Email pitches many PR people send out every day. But they’re limited to a maximum of 999 characters.

That’s not much — the previous two paragraphs come out to just over 900 characters. But that’s exactly why eGether is imposing the limitation. Anyone who has read many press pitches knows that they can become overly verbose, filled with unneeded backstory, explanations, and quotes. It can be struggle to tell what exactly a company does when that information is buried in a full page of text. And that problem is only magnified when there are dozens of other pitches coming in every day. eGether forces users to condense their pitches to the most important material. You can see a sample pitch in the shot below. 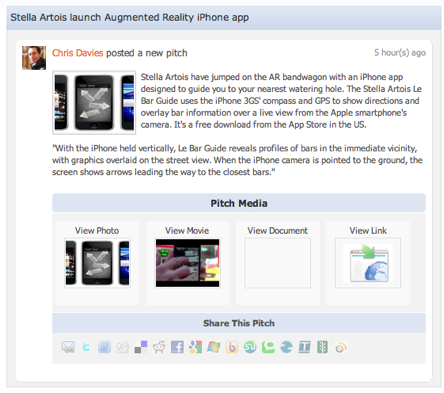 Of course, tech press aren’t the only people who want to get pitched. When you register on eGether, the site asks you what type of user you are: PR, Author, Consumer, Analyst, or Press. It can use this to break out users out into their own networks based on their field. That means an author could write a pitch for their book that would only be read by a literary agent or publisher rather than the entire site.

eGether has some solid ideas, but it’s going to face the classic chicken and the egg problem: it needs to get press, agents and other people looking for pitches onto the platform. Otherwise, it won’t be very appealing for PR people and authors to submit their pitches in the first place. That said, I don’t know many press who aren’t willing to try out an alternative to their mountains of Email, so eGether may not have such a tough time generating interest, after all.

Disclosure: CrunchGear editor John Biggs assisted Nguyen with some of the site’s functionality.