The tumultuous story of music search engine Seeqpod is finally coming to a close. Last June, we wrote that the company was looking to sell off its domain name, with evidence suggesting that it was about to be acquired by Microsoft. That didn’t happen. We’ve just heard from CEO Kasian Franks that the technology assets of SeeqPod are now being sold to a “large Japanese media company” (he wouldn’t divulge the name). And now the SeeqPod team is back building another company: the Mikojo music search engine.

Before we get to that though, a recap of SeeqPod’s difficult year. In February SeeqPod was slapped by lawsuits from EMI and Warner Music, as the record companies looked for billions of dollars in damages. In March, Seeqpod filed for bankruptcy protection and put itself up for sale.

There were strong rumors that the company was going to be acquired by Microsoft in a firesale, but that apparently didn’t pan out and Franks says that the company decided not to sell the domain name. But SeeqPod is now close to closing a deal with the unnamed Japanese media company, with the only holdup being the patent rights to the technology behind Seeqpod, which is owned by Lawrence Berkeley National Labs. Negotiations are ongoing, but it sounds like they’ll be reaching a conclusion soon.

So what about the new project? Three of Seeqpod’s lead engineers are now working on Mikojo, a music search engine that Franks says wants to be the comprehensive music search engine. But rather than only serving audio files, as SeeqPod did, Mikojo is meant to search all things music related. Run a search for “Led Zeppelin”, and you’ll see listings for lyrics, merch, tickets, and yes, links to songs. But unlike Seeqpod, which let you stream music directly from the site, Mikojo links you off to sites like Songza, which will keep them clear of the music labels’ wrath. Franks wants Mikojo to be the place people go when they want to find a music video from Vevo, or a song on MySpace Music.

One last (and unique) thing to note about Mikojo: the site has already IPO’d. Mikojo went through a reverse merger and is now listed under the ticker symbol MKJI. Franks says that the company did this because he’s not interested in “the romantic startup phase”. Rather than rely on speculation that leads to wildly varying acquisition prices (see Last.fm and imeem), he wants to “derive the real valuation based on a reflection in the stock price”. 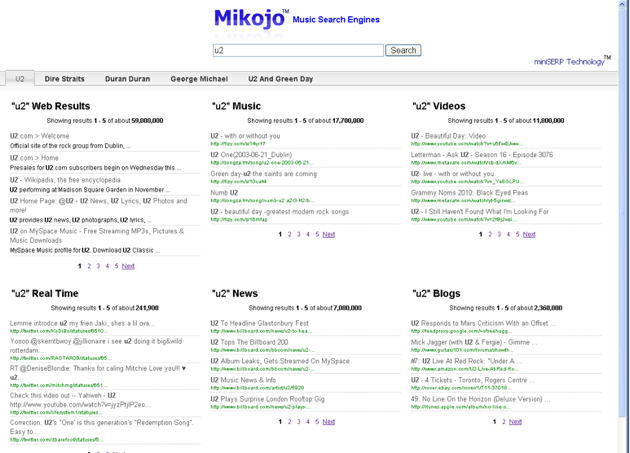