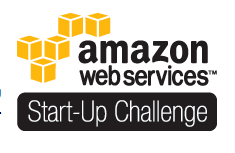 Amazon has announced the winners of its 2009 Amazon Web Services (AWS) Start-Up Challenge. The main criteria was to come up with a start-up that could have a lasting impact while utilizing AWS for its infrastructure. The grand prize winner this year is GoodData, a SaaS business analytics startup that helps companies easily visual data and metrics. The company won a combination prize of $50,000 in cash and $50,000 in AWS credits. The San Francisco-based company also has an investment offer from Amazon based on the win.

This year’s runner-up was Bizo, yet another business-oriented company, this one promising to deliver targeted audiences to customers. As the runner-up, Bizo gets $25,000 in AWS credits.

And finally, this year’s supplemental winner is FlightCaster, a company that says it can accurately predict flight delays. We’ve actually written about this Y Combinator startup a few times. With their AWS win they get $10,000 in AWS credits. Not bad, but probably not as big of a deal had they not just landed $1.3 million in new funding.

For next year’s AWS Challenge, Amazon is promising to open it up to a broader range of countries. They say they’ll announce details in early 2010.