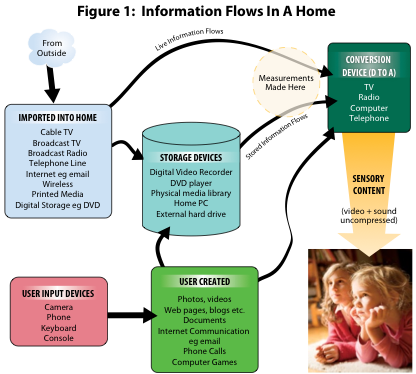 There’s a pretty interesting report that was just published today entitled “How much information?” It was put together by the Global Information Industry of the University of California at San Diego. It looks at the year 2008 and tries to quantify how much information the average American consumes across all forms of media: TV, newspaper, Web sites, radio, you name it. When you crunch all the numbers, it looks like the average American consumes 34 gigabytes of data every single day. (That’s 3.6 zettabytes in total.) That’s a lot, yes.

The report says that Americans consume information for an average of 12 hours per day. And this may be a dagger through some of your hearts, but “old media” (TV and radio) make up 60 percent of all consumed hours.

The word “Twitter” does not appear in the report at all. Call your congressman.

Americans consume 100,000 words per day on average. That includes all words read, all words heard, etc.

Americans are also on the computer for an average of two hours per day. It’s safe to say that everyone here at TC/CG isn’t “average” in that respect.

In other words, Americans consume a tremendous amount of information every day.