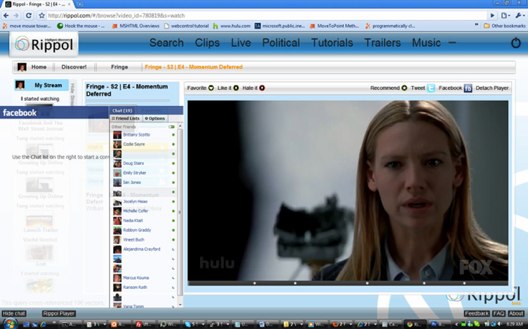 Rippol, the video discovery engine that combines both complex algorithms with user suggestions to surface interesting content, has tweaked its interface slightly to provide users with a lightweight version of the site when browsing. After receiving feedback post-launch, Rippol decided to adjust the settings of the site to not require users to login or register with the site to view video.

The startup tells us the lighter version is 100% HTML with no Javascript so older browsers can use it easily. The idea behind launching a simpler version is to allow users to view videos and then decide if they want a more personalized experience. Rippol has also launched a new content section called “Buzzy” which are videos that were data mined out of social networks. The videos, which have been stripped of personal information, showcase of content that is currently being talked about or posted on Twitter and Facebook. The algorithm that aggregates the videos takes into account the most recent videos and the most posted videos or Tweeted videos.

Rippol has also developed a go-around with the whole Hulu fiasco. After debuting at the Real-Time CrunchUp a few weeks ago, the startup’s co-founder Aaron Crayford received notice from Hulu that the video embeds on Rippol from Hulu were in violation of the terms of service which state that embeds are for personal, non-commercial use only. While Rippol says that they won’t place ads in the videos or around the videos, Hulu said that the simple fact that Rippol plans to make money from the entire content service violates the TOS. Instead, Hulu offered Rippol the ability to us its site map, which is a feed that links back to Hulu for video playback.

To circumvent the Hulu situation, Rippol is using Comcast’s Fancast, which it was already crawling.