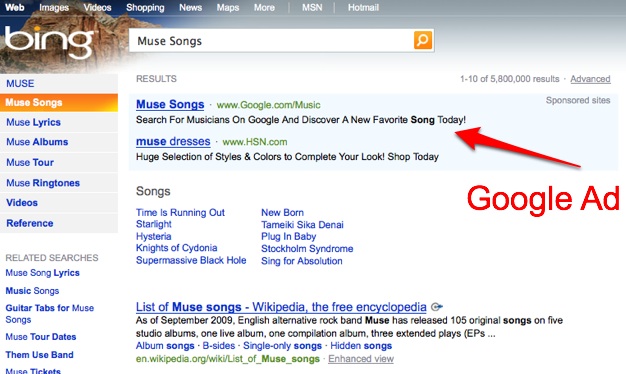 It was bad enough when Bing put ads on Google and in AdSense during its launch to get people to come check it out. (In fact, it’s still the top sponsored results when you search for “bing” on Google, even though Bing.com is also the top organic result at this point also). But now the shoe is on the other foot and Google is buying search ads on Bing for its fledgling Google Music Search.

Sure, Google only launched its music search about a month ago and most people probably don’t even know it exists unless they search for a song or artist like “Muse” on Google, and even then they wouldn’t know there is a separate site because the playable song results appear right at the top of the regular search results. But try searching for “Muse songs” on some parts of Bing and you get a paid ad for Google Music search. The ads appear for other artists as well, such as Lady Gaga and Radiohead.

Everybody knows that search ads are very effective, especially Google. And if people are searching on Bing for Muse or Lady Gaga songs, buying a search ad is one way to let them know they can also find results on Google. Bing, of course, is happy to take Google’s money (and vice versa). But seeing an ad for one search engine on a competing search engine seems like an act of desperation. It is almost a better ad for Bing because Google is acknowledging that buying ads on Bing is a good idea.