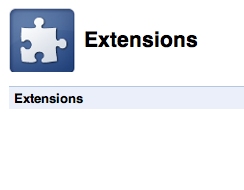 A couple weeks ago, Google unveiled its Chrome Extensions site after clues began popping up that a full-on push for extension support in their browser was imminent. Unfortunately, that site was only meant for extension developers who were allowed to upload their creations to Google. On the page, Google promised that end users who were looking for these extensions would have a way to do so “soon.” That will happen next week, we’ve learned.

Two sources close to the situation say that Google plans to unveil its Extensions Gallery at some point next week, probably in the middle of the week. This makes sense since Add-on-Con 09, a conference devoted to browser add-ons, is taking place next Friday, and Google Chrome is a Gold Sponsor of the event. Obviously, Google will probably want to have something they can actually show off at the event, rather than just a developer dashboard.

Apparently, the Extensions Gallery will be much like the Chrome Themes Gallery. It will be a page that lists a bunch of extensions and has a button to one-click download the ones you want. Presumably there will also be a link to learn more about what each extension actually does.

Several developers already have their extensions ready to go for Chrome. We’ve profiled Aviary’s and Shareaholic’s recently. And actually, there have been hundreds of extensions unofficially available for Chrome for some time via sites like Chrome Extensions. This morning we profiled 11 of the best ones found there.

Initially, Extension support will only be for the Windows-based version of Chrome. Even though the launch of the beta version of Chrome for Mac is imminent, that version will not have extension support built-in. However, the latest builds of Chromium (the open-source browser that Chrome is built off of) for Mac does support extensions, and even has an extension manager that works. It would appear that the Linux build of Chrome will support extensions whenever that beta is available.

Extensions will be very important for Chrome as it attempts to hit Google’s stated 10 percent market share goal in the next couple of years. Extensions have been one of the keys to the success of Firefox, as it continues to steal market share from the once utterly dominant Internet Explorer.

Disclosure: Add-on-Con is advertising on this site.