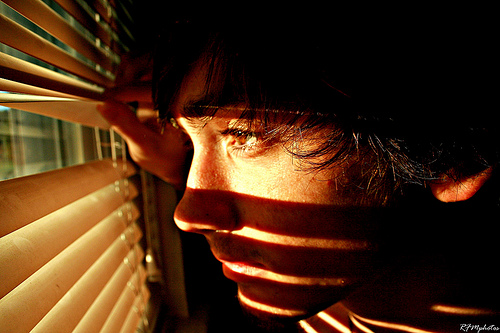 Osnapz’ Top Foursquare Users list takes advantage of Foursquare’s new API to create a list that sorts the “top” users of the service. I put “top” in quotations because the way they determine this by default isn’t a very good metric: It’s the number of people you allow to follow you.

On Foursquare, unlike Twitter, you have to explicitly accept new followers. The reason for this is obvious: Foursquare is all about sharing your location, so your probably are only going to want to do that with people you actually know. Well, unless you’re Scoble, of course. But truth be told, I’m on this list as well, at #42, with 234 people I allow to follow me. I wouldn’t consider myself close friends with all (or probably even most) of those people, but I do generally accept people that I’ve met before. But I have plenty of others that I don’t accept. That’s not meant to be a slight to them, but simply because the idea of random people knowing where I am is still a little weird.

This type of symmetric social relationship is of course the key to Facebook as well. But the rise of Twitter has led to the popularity of the asymmetric network. Even Facebook is doing plenty of asymmetric things now with its “everyone” sharing button and fan pages. But location adds a different element to this because it’s the bridge between the online social world and the real-life social world. That’s undoubtedly the reason that Facebook is taking its time with implementing native location elements to its service.

With time, people will become more comfortable with sharing their location with others online. But sadly, we’ll undoubtedly also see some situations of real-world stalking (both extreme and not-so extreme cases) that will crop up. The fact that Scoble and Leo Laporte (#1 and #2 on the list), who are both web celebrities of sorts, basically seem to be using Foursquare asymmetrically is interesting in that regard.

To be fair, Osnapz also allows you to sort the lists by number of mayorships on Foursquare (basically, what you get when you’ve checked-in to a certain venue more times than other people). That would seem to be a better indicator of “top users.” You can also sort these lists by the various cities that Foursquare supports.

“The foursquare API has a low rate limit so I can only add a few members at a time, but my process runs every hour to add more users, so over time, the list will be more comprehensive,” Osnapz creator Tuyen Nguyen also tells us. I hope so because I’d love to know if someone is more stalker-friendly than Scoble. 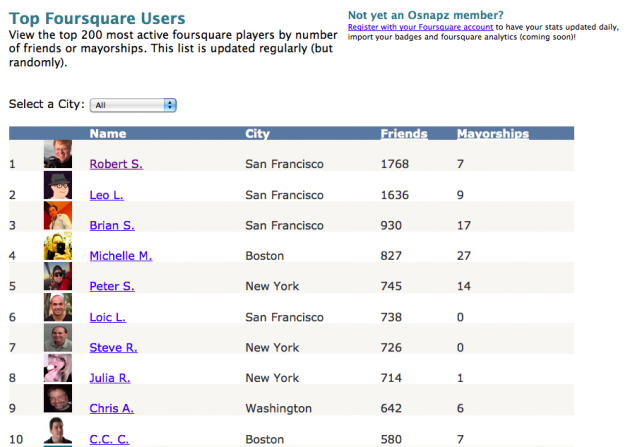