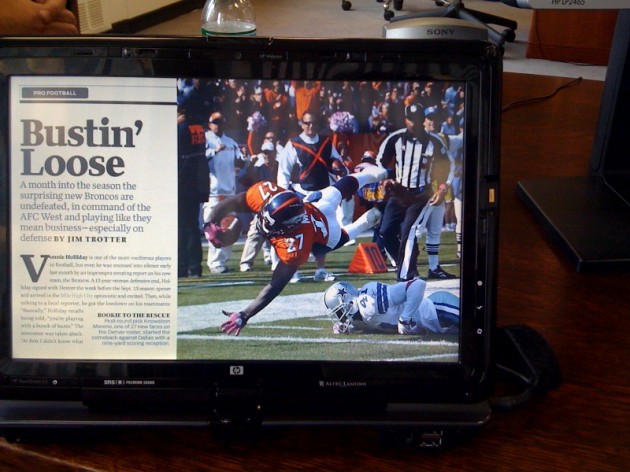 The magazine business is hurting just like all print publications. And even if their Websites are popular, they generate one tenth the ad revenue of the print side. Since last summer, Time Inc has been working on a “Manhattan Project” to create a digital magazine for the new breed of color tablet computers soon to come to market. (Condé Nast is also working on a similar concept). Today, I got a sneak peak at a demo of the tablet magazine designed for Sports Illustrated.

The demo was shown on an HP table computer with a touchscreen, but it could easily be ported to an iPhone or an Apple iTablet, whenever that becomes available. The idea is to create something so beautiful and fluid that readers will actually want to pay for it. The cover takes up the full screen and you tap it to show a table of contents with thumbnails of the actual layout, which you can rearrange to read in any order you like. To flip through the pages you swipe with two fingers, and you can also tap to get a navigational timeline at the bottom. There is also a navigation wheel which lets you share stories via email, Facebook, or Twitter, favorite a story, go to related videos or photos interviews, other articles, or stats such as live scores.

The tablet format is much easier on the eyes than reading the same story on the Web, and you get the added bonus of full-screen slide shows or videos. You can also flip through photos within the text, while continuing to read. Sports scores and other data can be dynamically updated from the Web, or you can share stories and photos via email, Facebook, or Twitter.

The concept was designed by David Link at the Wonderfactory, and it’s all done in Adobe AIR. If I still read magazines, I’d much rather consume them in this form than on paper. My one criticism is that there weren’t any links in the text I saw in the demo, but there is nothing stopping Time Inc editors from putting them in and there are ways to access data from the Web and push out content to it as well. So it is not exactly a glorified CD-ROM, but adding more links would breathe some life into it.

Terry McDonell, the editor of Sports Illustrated who showed me the demo, thinks that readers will be willing to actually pay for a digital version contained within a tablet. That remains to be seen. Josh Quittner, an editor at Time (and my former boss) who spearheaded the task force behind the digital magazine thinks of it as an app. If people are willing to pay for apps on the iPhone, why not deliver magazines as apps also? He’s the one who calls it Time Inc’s Manhattan Project. Hail Mary might be a better name.