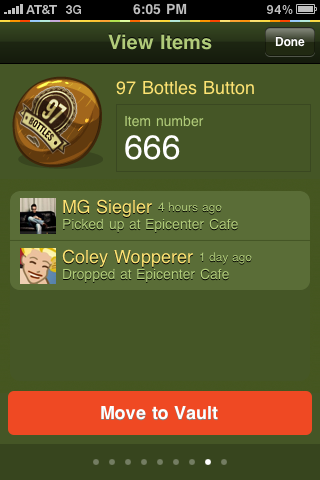 For some time now, it has seemed like Foursquare was the only game in town. I mean “game” literally, as of the major location-based services, Foursquare seemed to be the only one really emphasizing gaming elements. But now Gowalla is starting to emphasize it more.

To be fair, Gowalla has had a sort of sub-game based around the dropping and picking up of items (basically, virtual goods) since the beginning. But in the latest build of its iPhone app which hit the App Store today, version 1.3, there are some new gaming aspects. The first is that items now have histories attached to them. This allows you to see who has had an item before you in a city. Looking over some of my items now, it’s actually pretty interesting to see that I know some people who have some of them before me.

While at first the idea behind including items in Gowalla didn’t make sense to me, after meeting with (Gowalla parent) Alamofire CEO Josh Williams, it makes a lot more sense. Aside from this history element, which is interesting, and that different items are of varying scarcities, there is also a plan in place to allow for the items you pick up to be exchanged in real life for actual goods, Williams says. He wasn’t ready to share any specifics just yet, but notes that there are already some interesting proposals on the table to do this. And Gowalla 1.3 is a “bit of a Trojan Horse right now,” for that, he says.

Obviously, the eventual idea behind this is that Gowalla could monetize these transactions. The core concept is similar to what Foursquare is doing with its Mayor Deals, but they too haven’t yet started to monetizing those. With location-based services still in their infancy, all of these services are simply focused on gaining users.

And there’s another gaming element that Gowalla has added to the latest version of its iPhone app. Now, when you click on a venue, and click on the people tab for it, you can see a list of the top 10 people for that location. This is a list of the users who have checked into that venue the most amount of times over the past 90 days. In Foursquare terms, the top person would be the “mayor,” but again, this is a full top 10 list so more than just the top dog gets recognition.

Perhaps more importantly, with version 1.3, Gowalla has eased some of the GPS restrictions that curbed cheating but made it hard to check-in at certain indoor places. This should be much, much better, Williams tells us. The service is also hard at work on its native Android app, though they recently released a mobile web version that works with Android.

Gowalla is a free download in the App Store, find it here.