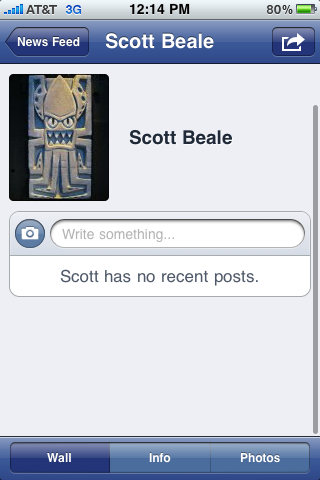 10 days ago, Facebook developer Joe Hewitt rocked the iPhone development world when he announced that he would stop making iPhone apps because he was fed up with the way Apple is running the App Store. This is significant since Hewitt was pretty much solely responsible for one of the most popular (and best) iPhone apps out there: Facebook’s. And now, just a little over a week later, we may be seeing the downside of Hewitt’s decision.

The Facebook iPhone app is broken [updates below, it appears to be an API problem], and has been for a while now. Every single user profile page contains zero updates or posts. Instead, each loads a stream that reads “USER has no recent posts.” Judging from Twitter searches, tips coming in, and a Facebook thread, this has been the case since at least yesterday, and possibly before that.

To be clear, Facebook’s main News Feed is still being populated with updated items, but if you want to see elements from any individual user, you’re out of luck. And that’s bad when one key feature of the iPhone app is the ability to pin friends’ profiles to your main screen in order to more easily access such information. And it’s really bad when, again, this is one of the most popular apps that there is.

After Hewitt’s decision to stop iPhone development, Facebook’s VP of Communications Elliot Schrage left us a comment reaffirming Facebook’s commitment to Apple and, in particular, their iPhone app. He wrote that Facebook “has a great team of engineers taking over iPhone related development.”

So a full team has replaced Hewitt, but they can’t seem to keep the app from breaking. And I’m not sure they even realize it is broken. But plenty of users do.

Update: In an email, a member of Facebook’s communication team confirmed the issue and says they’ve alerted the engineering team. But I’m still wondering how Facebook’s new iPhone “team” could have either missed this issue or have let it go unresolved for a day or so now?

How many Facebook developers does it take to fix an app? We’ll find out, I guess. The answer should be one: Hewitt. But sadly, that’s not the case anymore.

Update 2: Facebook has responded again that “this is the result of a backend Platform API issue, not the iPhone app. We are pushing a fix shortly.” So it’s a API problem that only affected the iPhone app. That sounds like an iPhone app problem to me — especially considering that Facebook controls both.

Update 3: Joe Hewitt has written to say that, “The FB API has glitches from time to time which break not just the iPhone app, but every app that builds on it, from Blackberry to Seesmic.” So I’ll guess we’ll just chalk up all the iPhone-only complaints to the fact that it’s so popular.