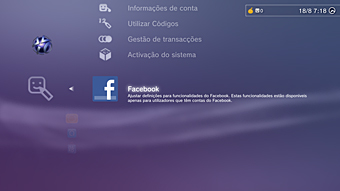 Facebook is coming to a PS3 near you as part of the latest 3.10 update, which will be rolled out over the course of the next day. We knew it was coming, but Sony has been vague about exactly when the update would land. Turns out it was sooner than most people probably guessed, coming only a day after the November 17 release of Facebook’s integration with the Xbox 360.

Here are some of the features listed on the press release Sony just issued about the update:

Showcase Trophies: Instantly share trophies you earn in PS3 games in your Facebook stream. Simply sync your PS3 system and easily show off your accomplishments to friends and family.

PlayStation Store Purchase Log Publishing: Let friends and family on Facebook instantly know which PlayStation 3 games you’ve purchased. The PlayStation Store, available to PS3 and PSP® (PlayStation®Portable) system owners through PlayStation Network, features over 200 downloadable games, many of which are exclusive to PS3 or PSP system owners, in addition to over 4,000 pieces of add-on game content.

Game Event: With a few quick clicks of the controller sharing select game events, progress and statistics is now easier than ever with the Facebook integration.