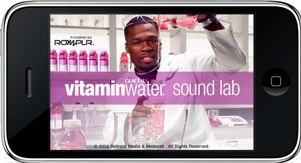 A plethora of rap and hip-hop artists have jumped at the opportunity to create branded iPhone apps, Including T-Pain, Snoop Dogg, Lil’ Jon, Soulja Boy and P. Diddy. Now 50 Cent is getting an app of his own, in partnership with Vitamin Water. The free app, called 50’s Sound Lab App, lets users create and share their own mixes of “Baby By Me”, a single off of 50 cent’s latest album, Before I Self Destruct. You can download it here.

The app is powered by mobile digital entertainment studio Moderati’s Romplr remix platform. Romplr allows fans to interact with music by creating their own versions of tracks by artists. Users can record and share their personal mixes via Facebook, email, or on Romplr’s site.

Romplr was first implemented on Soulja Boy’s pp, which was actually $4.99 in the app store, instead of free. But 50 Cent’s app only offers one song to remix, while Soulja Boy let users remix several of his tracks.

In addition to being able to remix the single, 50 Cent is giving the user that creates the best remix with the app (and shares it on the app’s branded site), the opportunity to meet him. Compared to the other rap-focused iPhone apps out there, this one falls a little short in my opinion. It only lets you remix one song, and it seems for like more of an opportunity for 50 Cent to create buzz around his new single and promote Vitamin Water than to actually create a broadly entertaining app.

That being said, its free and could provide for some interesting and funny songs. Plus, songs can easily be shared to social networks. If the app could include some of 50 Cent’s more popular songs, such as “In Da Club,” perhaps it could give T-Pain’s popular app a run for it’s money. 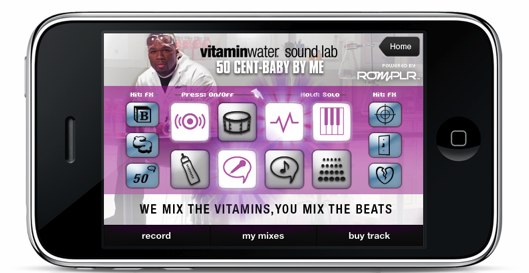