At the Web 2.0 Summit a few weeks ago, MySpace CEO Owen Van Natta outlined the strategy for the social network to perhaps regain some of its former glory: the “socialization of content.” While MySpace may not be seeing major growth in terms of new users, the social network is gaining major traction on its communities that are based on niche verticals, such as MySpace Music. Van Natta said that he thinks MySpace has a unique position on the web because of its music deals with all the major labels and the independent ones in the music space. Van Natta’s strategy is being applied in other verticals and MySpace Fashion is one niche community that has flown under the radar but features compelling content.

MySpace Fashion, which had a significant UI overhaul last week, aggregates news and provides original content about all things fashion and style, including established and unknown designers, clothing, accessories, trends and celebrities. The site and all of its features, which like all for MySpace’s niche platforms, can be fully accessed by non-MySpace members, making it a web destination as opposed to an enclosed community. The MySpace fashion community currently has includes over 500,000 MySpace members but site is also being accessed by non-MySpace members who simply want to visit the sites to checkout the latest trends and news about fashion. 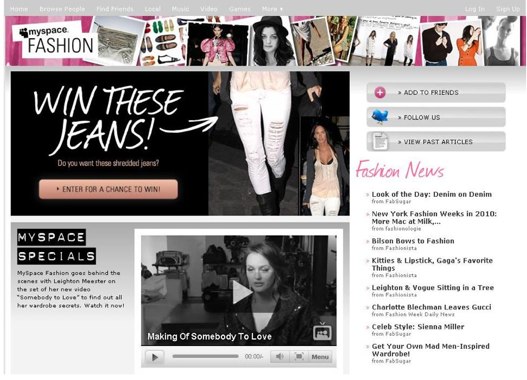 The site, which originally launched in 2007, includes several interactive features. The Fit is a weekly video video cast that follows celebrities and designers into their closets and along on their shopping expeditions. This week’s Fit follows celeb stylist Rachel Zoe and past shows have featured Paris Hilton, Lady Gaga and others. Fresh Face is a way to engage up and coming designers in the fashion world, and wisely engages the designer community. The feature includes photos from lines and a Q&A with the designer.

MySpace’s Behind The Seams is a video program that highlights the “influencers” behind the “seams” of the fashion world from store owners to stylists. The social network even has a give away to entice visitors; each Thursday MySpace gives away a designer item (i.e. handbag) to a user. And interestingly MySpace has two features which integrated content from other fashion news and content sites. Shop the Look, which is powered by ShopStyle, lets users find the same style as celebs but at affordable prices. WhoWhatWear, a celeb style and trend site, showcases a trend of the week.

MySpace Fashion’s editor Annie Meyers-Shyer says that all of the content on the site is targeted towards the 18-26 year-old demographic, and the site’s content and subject matter reflects this, with features on the Jonas Brothers and Taylor Swift. And MySpace is continuing to add new features to its fashion platform. In the next month, the social network will launch a designer directory, which will feature the MySpace pages of all the major brands, magazines, stylists, designers and more, making it easier for users to connect with the designers and brands they admire and love.

While MySpace Fashion isn’t expected be nearly as popular as MySpace Music, the site could be an interesting platform for monetization with brands as well as fashion focused entertainment. For example, I could easily see an opportunity to promote content for the popular reality show Project Runway. MySpace faces competition from several sites, including fashion community StyleCaster and AOL’s own venture into fashion news, Stylist.