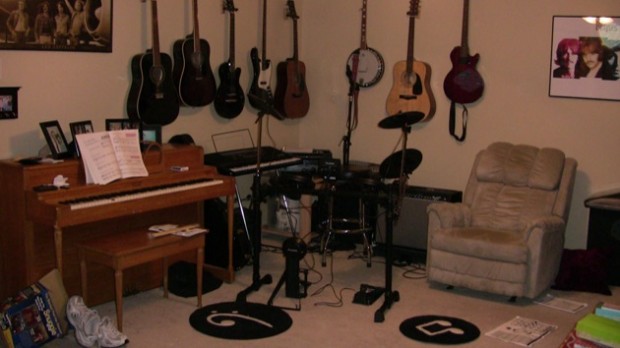 Short Version: The Alesis DM6 drum kit is a full set of electronic drums that is extremely accessible, yet just as difficult to master as the real thing. In un-packing the box it came in, one thing was immediately clear; this is no kid’s toy. This is a nine-piece set (10, if you include the drum module that makes the magic happen), weighing in at around 40 pounds.

The setup is easy enough, thanks to a simple, yet functional parts guide. I had it done within 30 minutes or so. I was struck by how much space this thing takes up. You might expect an electronic set to be smaller than its “real” counterpart, but you’ll still need to clear out some space for this one.

One of the first things that impressed me was the modularity of the kit. I had set it up according to the recommended instructions (a high-hat, crash cymbal, dual-zone snare, and tom on the left, two toms and a ride cymbal on the right), but it’s clear that you can put each piece wherever you like. Each piece comes with its own clamp that you can attach to anywhere to the aluminum rack. There is also a second clamp that allows you to adjust the angle of the piece.

There are two pedals, one for the bass kick, the other for hi-hat control. Both of these are extremely sturdy and well-built. The only small complaint I had about the kick pedal was that, for as heavy as it is, it still moved ever-so-slightly after just a few minutes of drumming, even on carpet.

Once your kit is set up, it’s time to plug it into something and turn it on. You’ll see your standard jacks, like headphones, 1/8″ stereo, 1/8″ mix in, and USB. There is also a very tiny switch to change the kick type from the pedal to a pad. I used a 1/8″-to-1/4″ cable to connect the drum kit to my 8-track for immediate recording, and had my 8-track connected to stereo speakers so I could play without headphones.

So, how does it sound? In a word, authentic. I was expecting to hear something good, but not great…..something more along the lines of a synthesizer. Instead, I was very pleased to hear sounds that could have come from a regular set of drums. When you hit each piece, a light blinks on the module, indicating the hit. The pads themselves are rubber, and are generally very quiet. The only exception would be the cymbals and hi-hat, as the sound of you hitting them with your stick is pretty noticeable. So, I played and recorded a bit. Then I tried out some of the other kits. There are 10 preset kits and five user kits available. Each are fairly distinct, and give you a nice variety.

The pads respond dynamically to the force you exert on them. Hit them lightly, you’ll get a softer sound. Or, you can bang on them as hard as you like to make it louder (and they are no worse for it). This is a nice feature, but I often found myself missing beats if I didn’t hit it exactly right, or with just the right amount of force. The snare was the biggest culprit, and even if I focused solely on it by hitting it with a solid rhythm, there seemed to be some loss of sound every so often. You can set the volume on each individual piece, so I experimented there, but wasn’t able to completely alleviate the issue.

If you don’t like any of the preset kits, or wish you could change part of it, you can. By selecting the VOICE button, and then hitting the piece of your choice, you can then change the sound of it to pretty much whatever you want. When you’re done, you can save your custom kit to any of the five user kits. There are 108 sounds to choose from, so you’ll really only be limited by your imagination. You’ll also find a metronome with a variety of sounds and can select any time signature you wish. The kit also comes with 40 patterns that you can play along with. You can change the tempo, and this feature can be a helpful practicing tool.

If you don’t have an external recording device, not to worry. You can actually record directly to the module and then export that out if you like. There is a 5,000-note limit for recording, so depending on what you’re playing, the length of recording time could vary greatly.

Bottom Line
With a street price of $499, it’s a hefty investment for the casual musician. But if you’re serious about playing and possibly recording, this is a great value. The amount of customizations from the hardware to the software, is impressive. All of the pieces are very sturdy, so the only chance at breaking something would be to tip the whole thing over…..but even then, you’ll probably be okay.