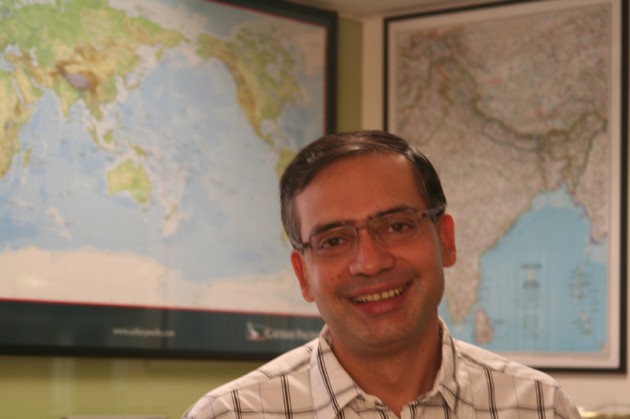 GURGAON, INDIA– Back in 1995, Deep Kalra knew that India had burgeoning consumer promise. So he took a risk, quit his safe-but-boring banking job and joined AMF Bowling—an American company that was aiming to bring bowling alleys and billiard halls to India for the first time.

It didn’t quite scratch his entrepreneurial itch: The hobby was ahead of its time for Indians. He managed to open about 200 lanes, most of them in small centers. Worse, Kalra was in that business-man’s-limbo: The venture wasn’t really his own thing, but he had a remote boss back in America who didn’t give him much mentorship or guidance.

So after four years, he headed back into the safe world of banking. And then, in 2000, with some money saved up, he decided to leave again and do things his way. Enamored by the Internet and frustrated by how hard it was to travel in India he opened MakeMyTrip.com. The site—as you might guess from the name—was like any of the online travel brokers started during the dot com bubble, only it was in India.

Of course, that was a pretty crucial difference. That venture too was ahead of its time, but it was his and Kalra stuck it out. After the market crash and September 11, Kalra’s foreign investors reneged on $1 million in funding commitments. Then there was the triple whammy of SARS, which made everyone want to travel in Asia less. He was 31-years-old with a wife and a baby at a time when starting a dot com was insane and in a place where it was downright suicidal. Indeed, many VCs will tell you today that India—where only 50 million people are online and just two million have broadband connections— is still not ready for the consumer Web.

But Kalra and two senior managers bought back their equity in the business and agreed to go without salaries for 18 months. He called a meeting and asked the staff to take 40% paycuts. Twenty-five of them stayed and 17 balked and quit. Kalra decided to focus on selling travel to returning Indian expats rather than locals, but he kept an eye on that sleeping giant of a domestic market.

A year later, MakeMyTrip broke even, in 2003 he reluctantly decided to trust VCs again and in 2004– when Internet adoption in India had finally started to grow and much of the Indians who had the money to travel had credit cards, bank cards or access to money transfers—Kalra came back to his original vision of building the Expedia of India. “There’s a fine line between resilient and stubborn,” he says, sitting in his office in Gurgoan surrounded by globes, maps and maps with mashed-up pictures of many of those employees who stayed. “It worked out, so we can say we were resilient. But at the time I worried I was just being stubborn. But I figured you regret the things you don’t do in life, not the things you do.” When I met him the day before, Kalra easily rattled off details of a bowling supercenter that opened up down the road after his AMF days. You can tell it stings a bit, but if we were sitting here having the same conversation about an online travel company that took off after he gave up, it’d be devastating.

What Kalra didn’t know back in those dark days was that he was about to benefit from a global Internet truism: Online travel is the ecommerce gateway drug. It makes up some 70% of global ecommerce, it was one of the first categories to take off in the United States and one of the only markets big enough to sustain a host of publicly traded Internet competitors. Similarly, Ctrip was one of the first big Internet hits in China.

India—a country with few Internet homeruns—took longer. But Kalra’s company is now making $5 million in US  dollars of profit this year and doing more than $500 million in gross bookings. Revenues are up 88% during the recession and one-out-of-every-twelve domestic flights in India is booked via MakeMyTrip.com. After airline tickets, the second biggest category is railway tickets—the site sells 2,500 of them every day. Kalra is busy interviewing a lot of US-trained management types to augment the team. Don’t look now, but MakeMyTrip could be India’s next dot com IPO. (Like most well-behaved CEOs, Kalra wouldn’t comment on any immediate IPO plans.)

Why does travel take off so fast? For starters, it’s one of the only categories where you buy something that’s delivered over email. Forget costs—in emerging markets shipping to far-flung areas doesn’t always exist. Kalra says etickets may have saved the company. For most, booking online doesn’t require a huge change in the way they buy travel. In pre-Internet days in India and the US most people booked travel through a travel agent who’d pull up inventory in a computer. The Web just cut out the middleman. (And his fees.)

Compare that to online shopping for physical goods, which requires a radical change in behavior. People who’ve only recently gained a disposable income frequently want the experience of shopping, and the ability to feel, examine and try things on. “Malls are still a new thing here,” Kalra says.

And because a ticket or hotel room is a perishable asset, someone who can move those assets can get a nice cut. Kalra has made more money during the recession by getting better rates from anxious suppliers.

Travel won’t be the ecommerce exception forever. India’s rush of a middle class with disposable income is evolving fast. When Kalra was growing up no one went on Honeymoons abroad and now most of the kids in his office do. And hotels were verboten—you visited family and stayed with family. Kalra has a hunch the next local ecommerce hit could be FlipKart, an online book retailer with a whopping 5 million monthly uniques, profitability and a new round of cash from Accel in the bank.

MakeMyTrip still suffers from some local cultural hang-ups. Hotel bookings, for instance, aren’t doing quite as well. People don’t trust unknown brands and only 15% of Indian hotels are known brands. (Personally, I don’t think US sites have cracked the hotel problem either. I only book from local recommendations.) Similarly, people don’t want to book big vacation packages online, so Kalra has opened 20 physical stores to guide people through the process.

And there’s the so-called “last mile” problem. Kalra doesn’t plan on addressing it by opening more stores. Instead, he’s playing with the idea of a business-to-business product, where existing local travel agents would use a slow-connection optimized version of MakeMyTrip to access more inventory than they can now and sell through the site’s existing back-end system. He doesn’t want to cram an efficient online option down the throat of a population that knows its local travel agent and likes to go in and chat with them, have a cup of tea and discuss cricket scores. And clearly one deal with a travel agent is a far more efficient way to reach a whole village.

Kalra is smart. He studies every competitor out there. He’s ripped ideas off lesser-known companies like FareCast.com, corrected me on the pronunciation of China’s up-and-comer Qunar.com (so much for my Mandarin lessons), and can quote Expedia’s customer conversion rates. (They’re 6%, by the way. His are 7%. It’s the most important metric he watches.)

Ahead of his time or no, Kalra is glad he took the risk when he did. He’s not sure he would today even with more money in his savings. He’s also glad he didn’t give up on India’s domestic market, “If I’d been in Silicon Valley I’m convinced we might have reached scale in half the time, but we also probably would have been obliterated by the competition.”

That’s the benefit of slowly emerging markets that’ll eventually have a big payoff—you get time to make mistakes.