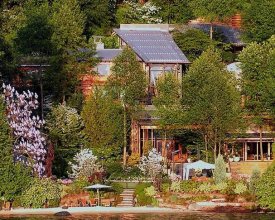 Microsoft (and particularly Bill Gates) is well known for it’s philanthropic work, including a charity auction conducted each fall. One of the most popular items donated is a tour of the Bill’s famous Lake Washington home. Last year, the highest bid was $8,600. This year, the bidding skyrocketed up to $35,000!

These amazing numbers were mentioned to the Seattle blog Techflash during a presentation from Microsoft’s CIO Tony Scott. I have to say, while the house is amazing, $35k seems a bit steep for a tour, but remember this is for charity. Also part of the same auction, the “world’s best bologna sandwich” topped out at $500 this year. No word if you would be allowed to eat the sandwich while touring the house though.