Sun Microsystems sure had some very nice things to say about the zembly project when it was introduced a couple of years ago:

Zembly was an interesting attempt to lower the barrier of entry to writing applications for social platforms such as Facebook, Orkut, Meebo, OpenSocial and the iPhone by sharing services and widgets with the developer community. But apparently, Sun’s bold vision didn’t quite cut it, so it’s cutting zembly loose and shutting the service down at the end of this month.

In a message sent to its users and posted on its website, the zembly team says the service will be suspended on November 30th, and the FAQ teaches us that all applications and services currently on zembly will be made unavailable, along with the user data of all members of the community.

Users have until the end of this month to get hold of their application code and widgets.

Zembly is now part of the illusive TechCrunch deadpool. 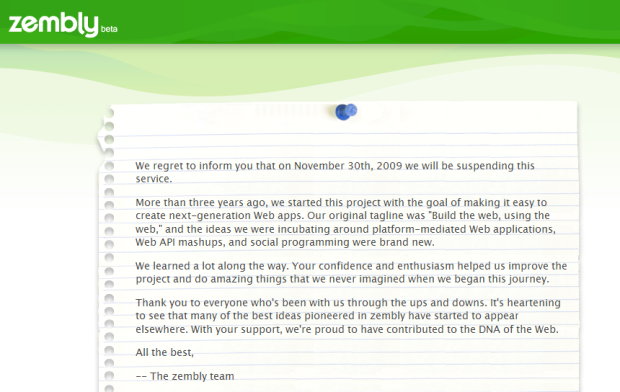